The main method used to produce wallpapers until well into the nineteenth century was Block printing which gave a very high quality product. The size of pattern repeat was limited to the width of the paper and the weight of wood block that the printer could work with. The wallpaper was made up of 12 sheets of hand made paper pasted together to make strips long enough to go from the top to the bottom of the wall. Usually a blank margin was left along both edges of the paper to protect the paper from damage during transportation, which was trimmed off before the paper was hung.

Where was wallpaper invented?

Egyptian papyrus was the earliest known paper invented around 4000 B.C. and the Chinese were thought to have glued rice paper onto their walls as early as 200BC. In the 8th century, a group of Chinese prisoners with papermaking skills who worked under some Arabs taught them their skills and they in turn spread the knowledge of papermaking throughout the Middle East. Things progressed slowly but by the 10th century, linen fibres were being used instead of wood or bamboo to create a finer paper. All of this enabled various individuals to experiment with printing onto this fairly even textured paper. The earliest European pictorial block prints were religious souvenirs, the oldest being a representation of the Virgin dated 1418 now in the Royal Library at Brussels.  This type of printing method may have also been used by the Chinese as early as the 5th century.

Jean Bourdichon was commissioned to paint several rolls of paper with angels on a blue background for Louis XI of France in 1481 to provide a feeling of consistency of surroundings for him as he moved from castle to castle.  Other well-heeled Europeans commissioned artists to paint paper for their walls.

The earliest wallpapers were used in Europe as early as the thirteenth century and were painted with images of popular religious icons and displayed within the homes of the devout and the poor. Within the next few centuries, papers were hand block-printed, but only remained popular with the poor. By the sixteenth century, however, more expensive wallcoverings embodying imagery taken from tapestries hung in the homes of nobility, became popular with the middle class. Small sheets either carried a repeating image, or several blocks produced a pattern spread across many sheets.
The earliest know fragment of European wallpaper that still exists today was found on the beams of the Lodge of Christ's College, Cambridge and dates from 1509.  It is an Italian inspired woodcut pomegranate design printed on the back of a proclamation issued by Henry VIII and attributed to Hugo Goes, of York.

The earliest surviving printed wallpapers used in households in England are block printed designs in black, sometimes with some additional stencilled patches of colour, representing heraldic designs, or sometimes with damask or brocade type designs, dating from the 16th Century. Other wallpapers carried designs taken from tapestries or woodcuts. In the 18th Century designs with acanthus, pineapples or other motifs taken from classical architecture were used to complement Palladian interiors and also the rich were able to buy hand painted scenic wallpapers imported from China. Designs popular during the Regency period featured fantasy architecture, Gothic ruins and Chinoiserie.

The main method used to produce wallpapers until well into the nineteenth century was Block printing which gave a very high quality product. The size of pattern repeat was limited to the width of the paper and the weight of wood block that the printer could work with. The wallpaper was made up of 12 sheets of hand made paper pasted together to make strips long enough to go from the top to the bottom of the wall. Usually a blank margin was left along both edges of the paper to protect the paper from damage during transportation, which was trimmed off before the paper was hung.

In the Victorian era, wallpapers and wallcoverings became possibly the most important element to interior decoration as they became accessible for the majority of comfortably off householders due to their wide range of designs and varying methods of production so that both the higher and cheaper end of the market could be satisfied at a more reasonable cost. This was due to the introduction of mass production techniques and the repeal in 1836 of the wallpaper tax that had existed for the previous 124 years. The wallpaper tax was introduced during the reign of Queen Anne and although this could be bypassed by purchasing untaxed plain paper and having it hand stenciled, it was still a major obstacle to the widespread usage of wallpaper by everyone but the wealthy. 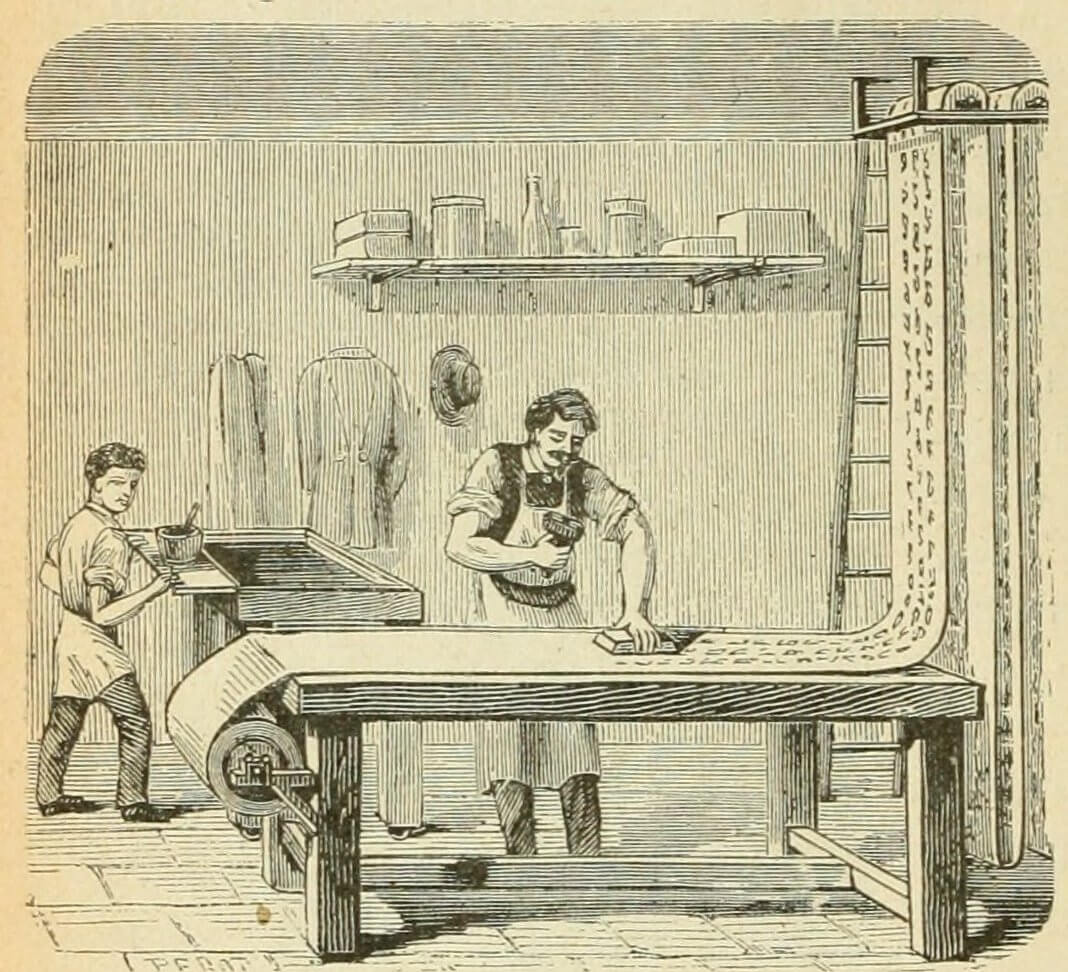 How was Victorian wallpaper made?

In the 19th century paper began to be made in continuous rolls first by Louis Robert in France in 1798 and then in England by Fourdrinier who patented a machine that could make paper to any length in 1807. It was not until the Excise Office lifted its ban on the use of continuous paper for printing wallpaper in 1830 that this invention could start to be properly exploited.

In 1839 Harold Potter, the owner of a wallpaper mill in Lancashire patented a 4 colour roller printing machine for wallpaper that could print 400 rolls per day. This machine was inspired by copper rollers used in the textile industry for printing chintz but for wallpaper printing it used a raised rather than an engraved pattern. Oil based inks were invented to work with this that would flow smoothly onto the rollers and coat the paper evenly. These early copper rollers were relatively small and so could not print large patterns so these new processes heavily influenced pattern design with most papers having small scale designs. On more expensive papers a larger hand block design was sometimes overprinted onto the small pattern.

Aniline dyes were discovered in 1856 increasing the choice and lowering the price of wallpaper colours. Arsenic and white lead were used in many Victorian papers as dyes which lead to widespread health issues for many workers in the industry, so that by the 1870s many firms were advertising their papers as being arsenic-free. As a consequence of these innovations, wallpaper production and use increased enormously as the price fell steadily throughout the 19th Century.

Wallpaper designs reflected the designers inspiration from textile design, architecture, landscape and flowers, with 3 dimensional motifs made to look as realistic as possible. Critics condemned these 3 dimensional designs as dishonest because they denied the 2d nature of a wall on which they were to be hung. Pugin and other artistic reformers believed that 2 dimensional motifs were the only appropriate wallpaper designs and in 1956 Owen Jones published The Grammar of Ornament, an interior design bible featuring flat repeating motifs, patterns and geometric shapes in strong colour combinations – this book hugely influenced interior design of the time. This movement helped to redefine the role of wallpaper as an understated backdrop to pictures and furniture rather than strong decorative statements. Muted colours were felt to be appropriate and dark colours were useful for not showing up the dirt in the city houses.

William Morris was of course highly influential in Victorian wallpaper design especially as he was excellent at self promotion of both his work and his thinking. His first wallpaper designs were the Trellis, Daisy and Fruit patterns in 1864 but these were expensive and were products really only for the elite.

With the introduction into rooms of the dado and picture rails to divide the room up, which was deemed to be the epitome of artistic taste, so wallpapers came to be produced in sets of three, one for cornice to picture rail, one for picture rail down to the dado and the last for the bottom portion of the wall under the dado.

Popular designs of the time included Japanese motifs either copied or imported, or relief papers that imitated stucco, embossed leather or wood panels. Two relief papers that can still be bought today are Lincrusta and Anaglypta.

Lincrusta, produced by Frederick Walton, was produced using linseed oil, gums, resins and wax missed with wood pulp, amost the same recipe as his first invention, linoleum. The mixture was pressed between heavy metal rollers, one of them engraved to produce the embossed effect. Lincrusta could imitate moulded plaster, wainscot, carved wood or stone, leather or tile and could also be pained, glazed and gilded. It was good for insulation, hard wearing, washable and could cover up uneven walls.  One of Waltons employees had an idea for a lighter and more flexible version of Lincrusta but when Walton did not show any interest in this he started producing this himself under patent and this became Anaglypta which went on sale in 1888. This became extremely popular as it had all of the advantages of Lincrusta but at a considerably lower cost. Other manufacturers produced alternative relief wallcoverings often associating themselves with well known designers to boost sales.

Relief wallcoverings were widely used for the area below the dado particularly in hallways and stairs as they were hard wearing. The colours picked were conventionally darker to lighter as you progressed up the wall. Anaglypta was widely used as a ceiling paper with imitation Jacobean and Elizabethan ceilings with special designs for the frieze area to mimic fancy plasterwork at a low cost.

Dados continued to be installed in the halls and stairs of new houses up until around 1914. Towards the end of the Victorian era a simplified approach was taken with Lincrusta or Anaglypta painted white often used as a continuation of the ceiling and as a contrast to the bold patterned wallpaper used below.

Sanitaries, single colour washable papers printed with water resistant ink were introduced in 1871, with multi coloured washables introduced around 1884. These were mainly used in kitchens and bathrooms. 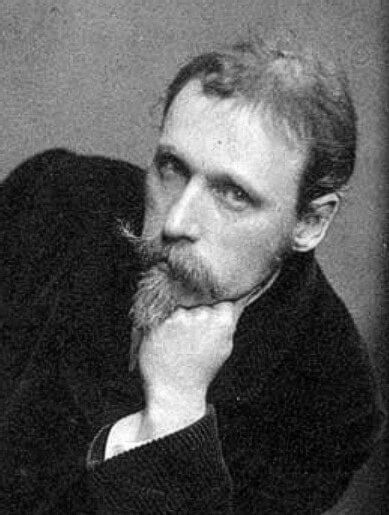 In 1884 Walter Crane design The Queen of Hearts paper, the first paper designed for nurseries by children’s book illustrators with a washable nursery paper produced by Kate Greenaway in 1893.

The average householder probably did not have William Morris designed wallpaper in their home however, but watered down versions of the work by the prominent designers of the time. Silver Studio supplied designs to wallpaper manufacturers for around 80 years from 1880 onwards which echoed the designs of those who lead the fashions but were diluted and longer lasting in the houses of the middle classes.

Wallpapers were used mainly in the most prominent rooms of the house, namely the living room or parlour, dining room and the most important bedrooms. Bathrooms and kitchens were usually tiled or painted.

Yes wallpaper is back in fashion now. Interesting to visit William Morris house to see examples.

​Brilliant condensed history  of wallpaper.  Thankyou. A visit to Wightwick Manor is also a must to see William Morris examples