A tile is a manufactured piece of hard-wearing material such as ceramic, stone, metal or even glass. Tiles are generally used for covering roofs, floors, walls, showers,or other objects such as tabletops. Alternatively, tile can sometimes refer to similar units, made from lightweight materials such as perlite, wood and mineral wool,typically used for wall and ceiling applications.

The word is derived from the French word tuile, which is, in turn from the Latin word tegula, meaning a roof tile composed of fired clay. The expression

By contrast the use of tiles goes back a very long way. Some form of ceramic tile has been in existence for more than 25,000 years.

Tile as we know it dates from c4,700 B.C. in Egypt while glass tiles were popular in 2,500 B. C.  At Wittenham in Oxfordshire masses of Roman roof tiles were discovered in 2004 indicating that large  Roman buildings became a part of this important landscape when the Iron Age gave way to the Roman period some 2000 years ago.

Tile making in the medieval period was associated with monasteries and palaces. Potters travelled around the country using local clays and firing them on site. The tiles were hand made by flattening the clay and cutting pieces into shape. The only mechanical aid was a wooden mould carved in relief which indented a pattern on the clay slab. The slab would be dried and the impression filed with white pipe clay. After further drying this would be shaved flat. A glaze of lead ore was sprinkled onto the surface and the tiles were then fired.

These ‘encaustic’ or inlaid tiles were made from the 12th to the 16th centuries. This skill disappeared with the dissolution of the monasteries and was not revived until the Victorian era of the 19th century.

When did tiles become mass produced?

As a result of the Industrial Revolution the manufacture of both wall and floor tiles hit a peak in the Victorian era. During Queen Victoria's reign tiles began to be mass-produced and were used in many public buildings,  churches, shops and houses for their functional properties and decorative effect. Victorian potters had a large, cheap labour force. Consequently many experiments in tile making were carried out, much of the work being done by hand. Decorated wall tiles came into general use in the 1870s.

In the mid 18th century the importation of hand-painted glazed tiles from Holland led to their imitation by English suppliers albeit on a small scale. This in turn led to the spectacular growth in tile production in the early to mid 19th century led by the porcelain manufacturer Herbert Minton, who revived encaustic tile making and developed the process of dust-pressing which is the most common modern manufacturing method. 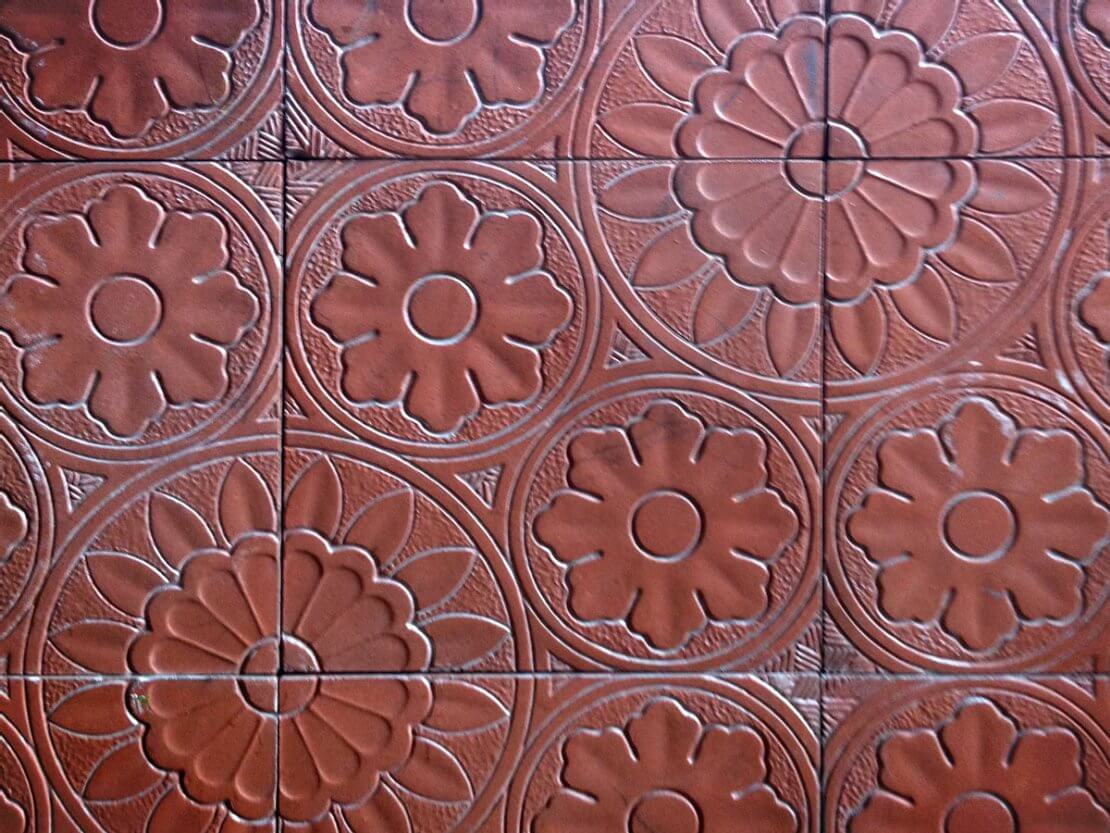 As the mass production of tiles developed in the Victorian era so their increasing cheapness and ease of installation in all areas of houses led to a constant and growing demand. An encaustic tile is produced by the combination of a plain clay tile with the filling of an area formed by stamping an impression on the tile with liquid clay of a contrasting colour and then firing to fuse the two clays.

Thus was revived the process lost in 1538 on the dissolution of the monasteries. The early tiles produced by Minton carried on the tradition of tiles to be installed in churches but soon included designs suitable for public buildings and houses by which time the entry of rival manufacturers had widened the scope and variety of tiles offered to the public. Tiles were now being produced in technologically advanced forms with multi firings involving up to six different colours, each of which required separate firing.

By 1850 tiled floors having been installed at many royal and aristocratic locations, crystallised the ambitions of those who could afford it
to emulate their superiors. It was possible to compromise on cost  by combining the relatively expensive encaustic tiles with cheaper plain square and geometric tiles. A popular area for geometric tiles in a middle class home was the hall and the cheaper class of tile tended to be installed in the less grand areas such as kitchens and servants quarters and in areas that received most wear and tear. The very fashionable tiles offered today for installation in kitchens would have been considered totally inappropriate in the Victorian era.

By contrast the most common area using decorative and therefore more expensive tiles was the fireplace and artists would frequently be employed to provide designs, the more exclusive ones being used in reception rooms rather than bedrooms.

Wealthier households embraced the Arts and Crafts movement and used tiles made by hand rather than the mass produced variety. Fashionable designers included William Morris and William de Morgan and their processes of production included hand-painting, transfer printing and the reproduction of the turquoise blue and lustre glazes of ancient Persian pottery.

This is really interesting, You are a very skilled blogger.
I’ve joined your feed and look forward to seeking more of your magnificent post.
Also, I have shared your website in my social networks!

Thank you, for publishing this article.

I have enjoyed reading it, and I wish the Tile Saviours,’ All the very Best’.