This question covers two potential trains of thought. Victorian fashion comprises the fashions worn by those Victorian men and women who cold afford clothes that were about more than just covering their bodies and keeping them warm.

Also styles that ape Victorian trends have been coming and going with amazing regularity in the last few decades, in fact in the 2017 catwalk shows there were a lot of Victorian style detail blouses, rich deep velvet fabrics and lace up boots in the top designers collections which were then aped by the cheaper mass produced producers such as Zara and Gap. And of course in the mid 1980s, corsets were popularised by the likes of Madonna. In recent decades, Steampunk fashion has become popular, which are clothes in an industrial Victorian style featuring many of the Victorian silhouettes and styles but also featuring leather, metal, goggles and gears.

The Victorian era was a busy time for fashion with not only changes in tastes and styles but also in fashion technology and the methods of distribution of these clothes. The era was a time of economic growth in England and with the means of mass production of garments due to the reduction in unit costs of sewing machines and industrialisation of other parts of the garment fabrication industry. The means of distribution also developed in leaps and bounds with the growth of the rail network.

The era also saw the availablilty of cheap synthetic dyes to give a greater choice of vibrant colours.  Clothing could be made more quickly and cheaply to respond to fast changing fashions. Due to innovations in printing and womens fashion magazines, the masses could see pictures of the latest trends worn by the great and good, opening the market of mass consumption and advertising. By the beginning of the 20th century, most clothing was made in factories and often sold in large, fixed-price department stores rather than by hand by bespoke tailors and seamstresses.

What did upper class women wear?

Upper class women, who did not need to work, most commonly wore a tightly laced corset over a bodice or chemisette, and paired them with a skirt adorned with numerous embroideries and trims, over layers of petticoats. Middle class women wore similar dress styles; however, the decorations were not as ornate and costly. 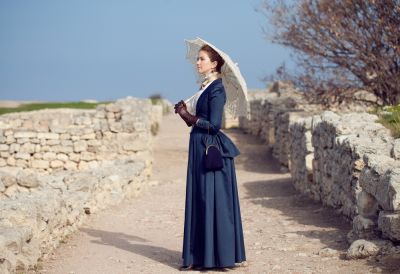 These garments were layered which made them very heavy. Corsets were stiff and made movement difficult.

For evening attire, a low shoulder neckline which displayed a woman’s shoulders was favoured by upper class women.

Corsets were used in women’s gowns for emphasizing small waists and serving as an undergarment to be adjusted to pull in the waist and stop the bodice from creasing.

The typical Victorian dress shape was an elongated V-shaped bodice, and full skirts with  the sides of bodices stopping at the natural waistline with sleeves that were tight at the top, but wider from the elbow to the wrist. Necklines of day dresses also tended to be in a low V shape therefore the bust area was covered with a chemisette.

Later in the era, skirts expanded with the use of a crinoline in a dome shape. The purpose of the crinoline was to create an artificial hourglass silhouette by accentuating the hips, and fashioning an illusion of a small waist, along with the corset.

During the 1880s as cycling and tennis became acceptable feminine pursuits, a greater ease of movement in women's clothing became essential. The diversification in options and adoption of what was considered menswear at that time coincided with growing power and social status of women towards the late-Victorian period. 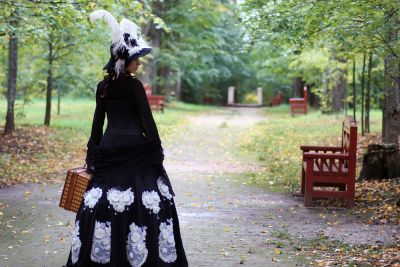 Hats (and gloves) were crucial to a respectable appearance for both men and women with upper and middle class men donning the top hat as standard formal wear.  For women hats were modest in size and design, straw and fabric bonnets being the popular choice.

Victorian mens fashions consisted of tight-fitting, calf length frock coats and a waistcoat or vest that was single- or double-breasted. For more formal occasions, a cutaway morning coat was worn with light trousers during the daytime, and a dark tail coat and trousers was worn in the evening. Shirts were made of linen or cotton with low collars, occasionally turned down, and were worn with wide cravats or neck ties.  Breeches were used for formal functions and when horse riding. Men wore top hats, with wide brims in sunny weather. Bowler hats were worn by the working class.

During the 1870s, three-piece suits grew in popularity along with patterned fabrics for shirts.

The end of the era – men’s clothing habits that endure

In the mid 1880s, the dinner jacket or tuxedo became the modern clothing of choice for more relaxed formal occasions. The Norfolk jacket and tweed or woollen breeches were used for outdoor pursuits such as shooting. Knee-length topcoats, often with contrasting velvet or fur collars, and calf-length overcoats were worn in winter. Men's shoes had higher heels and a narrow toe. By the 1890s, the blazer was introduced, and was worn for sports, sailing, and other casual activities.

Clothes for the poor

The poor would rely on the huge second-hand clothes trade during the period, and take time altering old clothes for themselves and their families to make them fit or to make them more like what the affluent classes were wearing. Clothes could be dyed and the good parts of a garment made into children's clothes or accessories, and areas of wear could be patched. There was even a market for ragged clothes that had been through several owners - these were still worn by the destitute.