The kitchen came from very humble beginnings in the Middle Ages, where peasants lived in one room which served as a room for cooking, eating and general living. The kitchen really consisted of a hearth stone, a smoky wood fire with a pot on top and a wooden spoon. This was used from as far back as the Saxons right up to the time of the Tudors as it was a very effective method of food preparation. Food was foraged so the diet was seasonal and quite limited. Bread was not cooked at home but in the oven of the Lord of the Manor along with the bread of all of the other peasants.

In Tudor times the kitchen still had no chimney as chimneys were expensive, and most meat was salted or smoked, not eaten fresh. Middling households started to introduce brick bread ovens and bake their own bread. 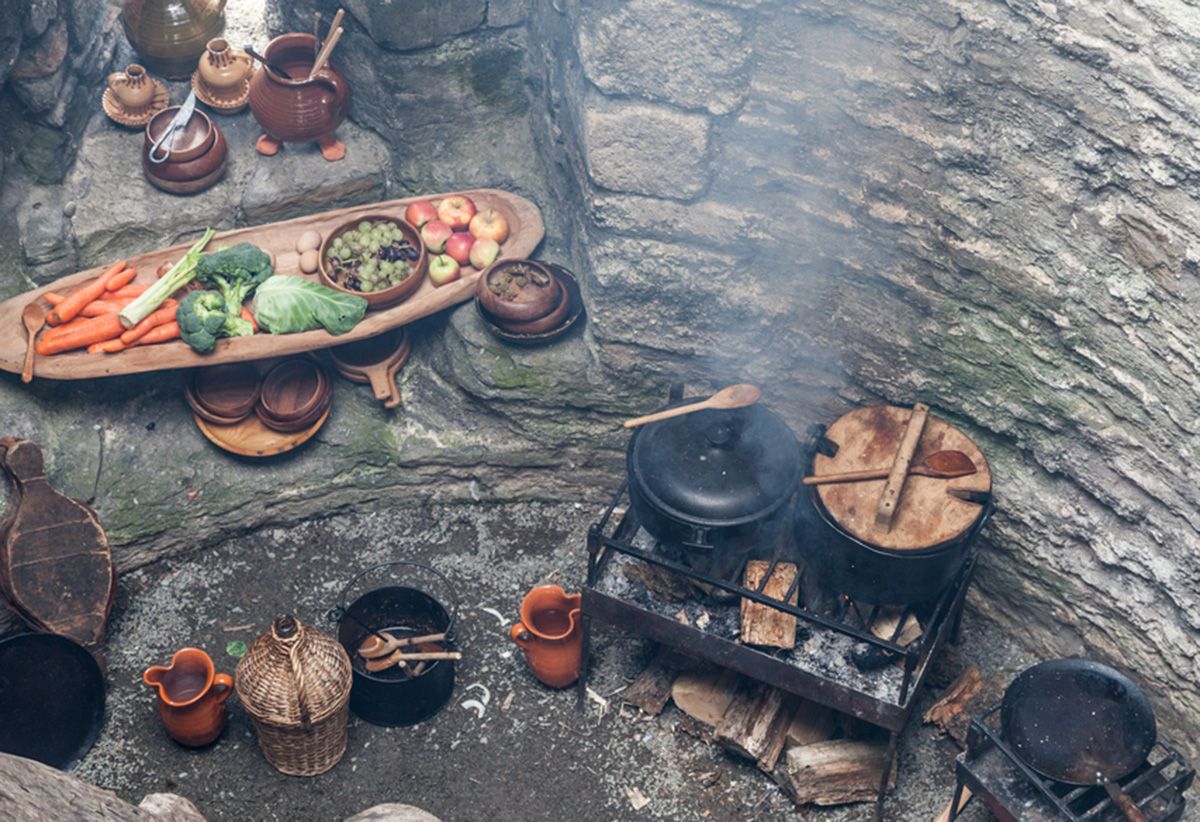 Due to the heavy demands on wood for ship building and other purposes there was a huge desire to find another source of fuel and in the late 17th century, coal caused a revolution in the kitchen being both cheaper than wood and burning at a higher temperature. Other innovations were also being introduced, some of them due to the new fuel being used. In 1802 a new type of cooking method, the range, was introduced. This consisted of a grate placed between two cast iron ovens, with a cast iron plate on top and a sealed chimney. The range became popular from the 1930s, specially those manufactured by Flavels of LeamingtonThis was the prototype for a modern oven – it was smoke free and fuel efficient and embraced by many owners of country houses.

Kitchens of the rich were a reflection of their power and status and as such were often a collection of many rooms with different functions and a large staff. These kitchen wings were put as far from the living rooms as possible so that no smoke, smells, or noises penetrated the family living areas and any fire hazards were kept far away.

One of the biggest influences on Victorian kitchen design were the kitchens of aristocratic and high status buildings as well as the kitchens used by the famous chefs of the which included such innovations as rotating spice racks, steam powered spits, jelly moulds and can openers.

And one of the biggest influences on running a Victorian household was Mrs Beeton's Book of Household Management, with advice on fashion, childcare, animal husbandry, poisons, the management of servants, science, religion, and industrialism as well as over 900 recipes.
However few of the poor had ovens and had to rely either on open-fire pan cooking, buy their hot food out, or make do with cold meals. Many families possessed only one pot and often this was used for many functions other than cooking. Standard fare consisted of bread, butter, potatoes, beer, and tea, with some bacon for those earning higher wages. In Macclesfield 23 per cent of the silk workers and in Coventry 17 per cent of the labourers had never tasted meat in the 1870s. Stocking weavers, shoe makers, needle women and silk weavers ate less than one pound of meat a week and less than eight ounces of fats. As a result, many Victorians were undernourished, anaemic, feeble and rickety. It was not until the last quarter of the century that the working man's diet improved significantly. Between 1877 and 1889 the cost of the average national weekly food basket of butter, bread, tea, milk and meat fell by some 30 per cent, and it was in this period that the first really appreciable nutritional improvement (aided by a greater variety of foods and new methods of retailing), occurred. The cheaper food products which came in with the refrigerator- and then freezer-ships, the development of inexpensive margarine, the fall in price of most consumer items, all served to increase both the variety and quantity of the workmen's diet in this period.

In the 1830s there was a middle and upper class revolution in dining. Before this time, all dishes would be laid on the table at once, like a sort of buffet. It was only from the 1830s that people started to eat courses and have a clean plate and set of cutlery for each one which significantly increased the amount of washing up and also the styles of cutlery required. 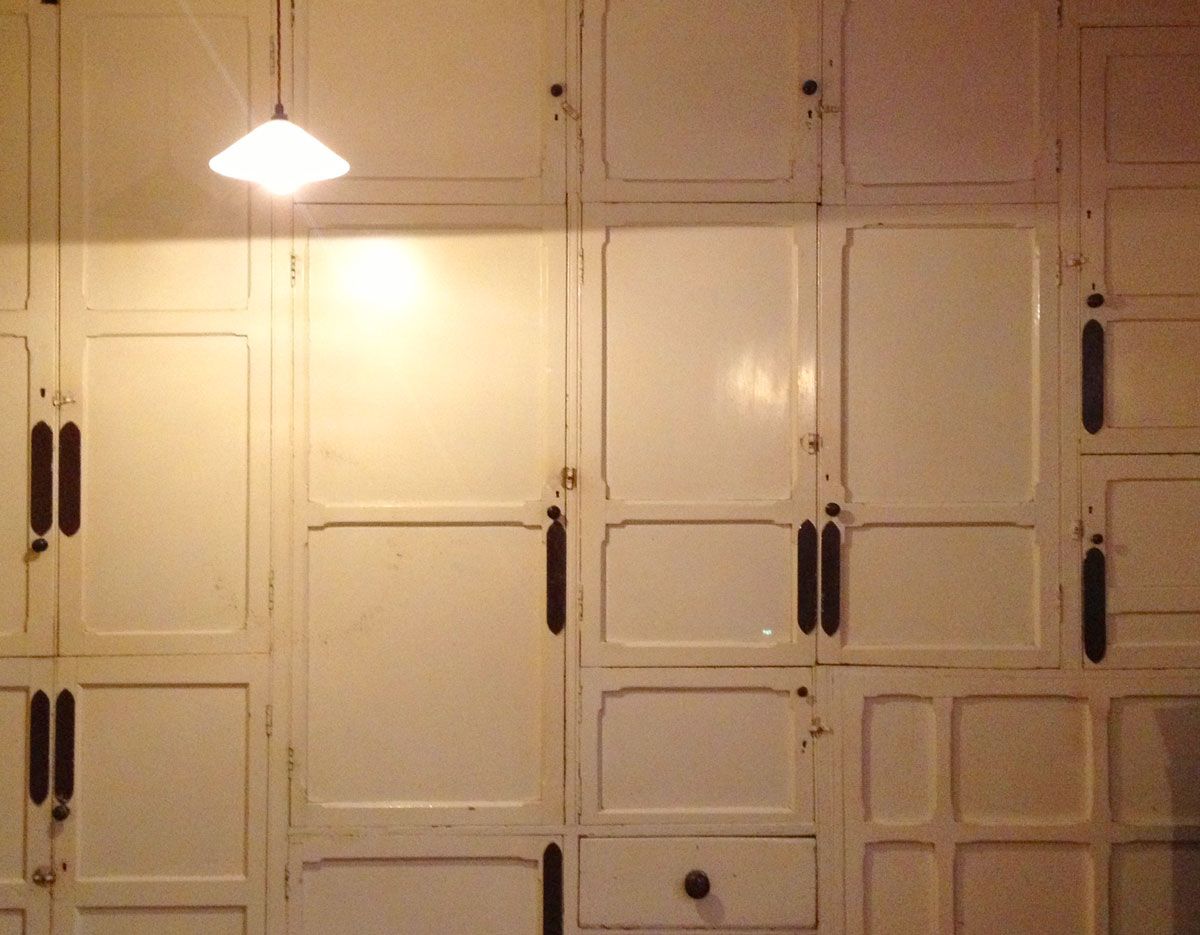 Of course the rich continued to eat a wide variety of different foods as did the middle classes, depending on their level of income. The main meal of the day was usually served in the early evening (with a light supper served later) and a typical Victorian middle class dinner could consist of:

The decision about the location of the Victorian kitchen within the house came from further back however and the general advice was to site the kitchen on one of the cooler sides of the house, facing north or east, with doors placed to avoid a draught of air approaching the fireplace. High ceilings helped to keep the room cool with high windows allowing hot air to escape and keeping lower wall space free for cupboards and shelves. The additional benefit was that if the servants could not see out, they would not be distracted from their work!

Due to the ferocious appetite for coal of the kitchen range and the amount of washing up generated by the meals, the coal store and scullery were sited right next to the kitchen. Food storage areas might include a wine cellar, a dry goods store, a vegetable store, a game larder including hanging racks, a fish larder, all separate and specifically designed to house their contents. Not all Victorian houses have all of these separate areas however the minimum a respectable middle class house would possess would be a kitchen, scullery, larder and coal store. Often corresponding to our modern day kitchen, laundry room, downstairs toilet and shed.

The existence of the kitchen was concealed as far as possible with a baize door clearly marking the boundary between the servants and family domains in upper class houses. Large country houses had completely separate service wings. In terraced houses where space was more limited, the kitchen was usually in the basement or at the back of the house behind the staircase. For a basement kitchen, a dumbwaiter was an essential asset for bringing food up to the dining room both quickly before it got cold, and quietly so as not to disturb the diners. It would also convey dirty dishes back to the scullery. 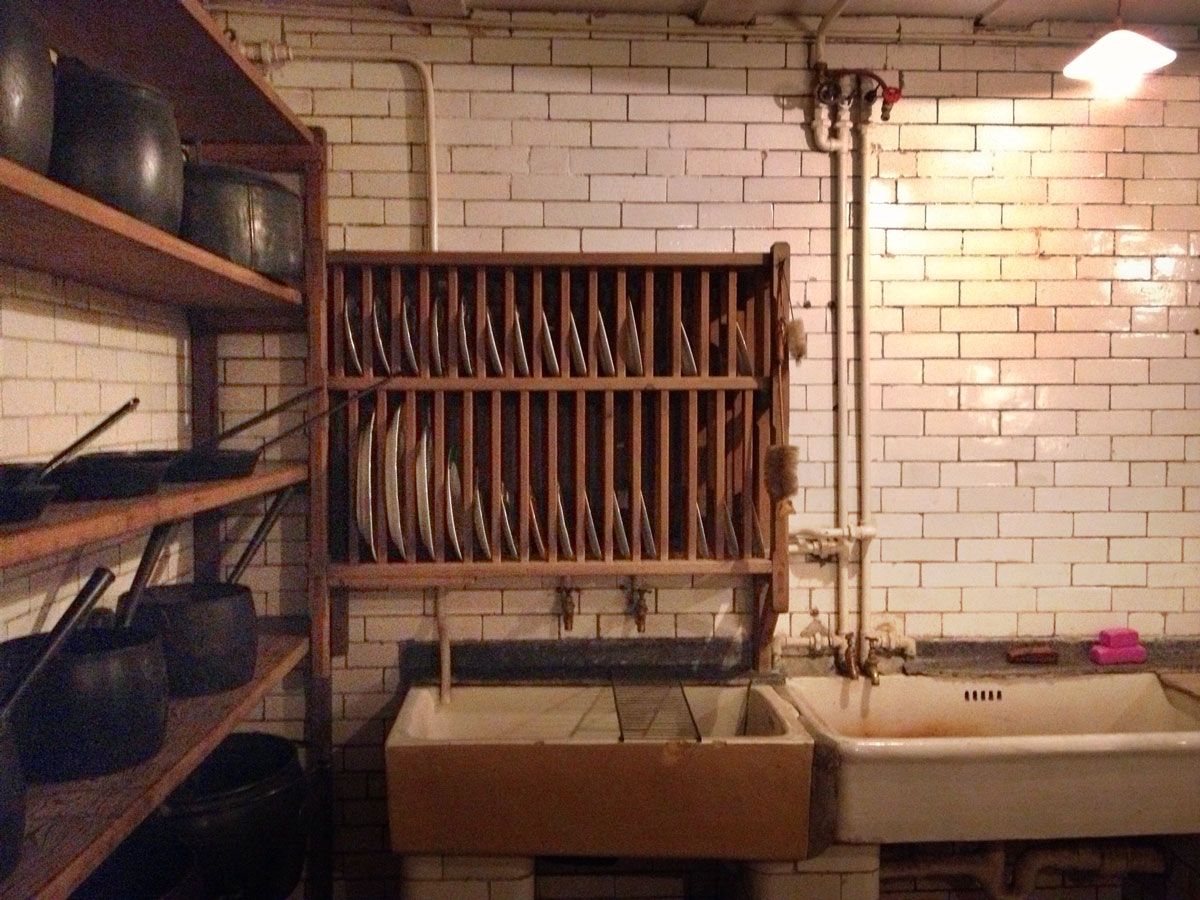 What was in a Victorian kitchen?

Until the 20th century, there was unlikely to be a kitchen sink; basically there was a ‘dry’ kitchen and a ‘wet’ kitchen and anything involving water was done in the scullery, the kitchen only being used for cooking. The Belfast or Butler sink in the ‘wet’ kitchen or scullery, was usually placed beneath the window in order to get good light. The evolution of the sink was: stone, or wood lined with lead, copper or zinc. Fireclay sinks were produced in the Midlands from the eighteenth century and ceramic sinks from the middle of the nineteenth century. In 1897 when the first Butler sinks were being manufactured, water was not plentiful in London. However in Belfast water was not in short supply. Therefore two models of the sink were produced. The Belfast Butler sink has an overflow whereas the London Butler sink has none. That's because in Belfast where water flowed freely the Butler sinks could be designed to allow for overflow as wasting water was not a big issue. Meanwhile in London people were encouraged to conserve water because if they simply forgot to turn off the tap, they would have a flood to clear up. It may be called a Belfast sink, a Farmers sink, a London sink or a Butler sink, but it or any of it's modern variants would be perfectly at home in any Victorian scullery then or now.

A single brass kitchen tap provided cold water only and the main water supply was usually on only for 2-3 hours per day so houses had cisterns in order to store their water. Hot water had to be carried in from the kitchen range where the boiler usually held around 2 gallons of hot water, very little by today’s standards.

Poorer families, if they owned a bath at all, used it in front of the kitchen range. This was the warmest place in the house and close to hot water created by the range which they would use to fill the bath – it could take a long time to create enough hot water for a bath hence bathtimes were laborious and the whole family would use the same water. Bathing traditionally took place once a week on a Sunday.

The kitchen floor was usually stone slab or tile, although there was sometimes a wooden floor area where the cook stood. The upper walls were usually plain and whitewashed, with the lower part covered with a wipeable surface ie tiles or glazed brick for hygiene and hard wear.

The large Victorian kitchen would always have a rectangular softwood table for the preparation of meals. A dresser, open at the top and with cupboard doors and drawers lower down, would hold cooking equipment, utensils and some crockery. Often the cook would have to sleep in the kitchen so a small bed and chair was tucked away in the corner. She would work long hours starting work before her employers were up and finishing work after the last of the supper was cleared.

Quote: “An honest baker is one who buys his own Sunday dinner”. Comes from the fact that people too poor to afford their own coal for roasting their Sunday joint often gave it to the baker to roast in the residual heat from the bread oven once the day’s baking was over. However it was often returned to it’s owner much smaller than it had started off.

Victorian Emporium offers a wide range of products for your Victorian kitchen including kitchen handles.

​Very interesting, I am restoring an antique dolls house and was looking up Victorian kitchen sinks to see what should go in it but now know that they probably wouldn’t have had a sink in the kitchen.

Thoroughly ​interesting. Thank you for your time to write that, it has left a lasting impression. G.Bless.