Background to Victorian decoration and furniture

Design of anything in a particular period will depend on the social and creative background to the period and in Victorian Britain there was a massive diversity in styles and a high output of furniture. The Victorians loved to show off their wealth and good taste and this was demonstrated by the interior design and decoration of their homes and the furniture they chose for it. The newly rich entrepreneurs wanted to be seen as equal to or better than the aristocracy and the new middle class wanted to show their success and status to their friends – these desires were manifested in the diversity of furniture styles and choices that were marketed to them.

The business class chose furniture with a classical design, which was at odds with the furniture found in the average middle-class home or even those of many wealthy people. However these new designs were copied in a simplified and more economical fashion by other furniture manufacturers and produced on a large scale to sell to the mass market. 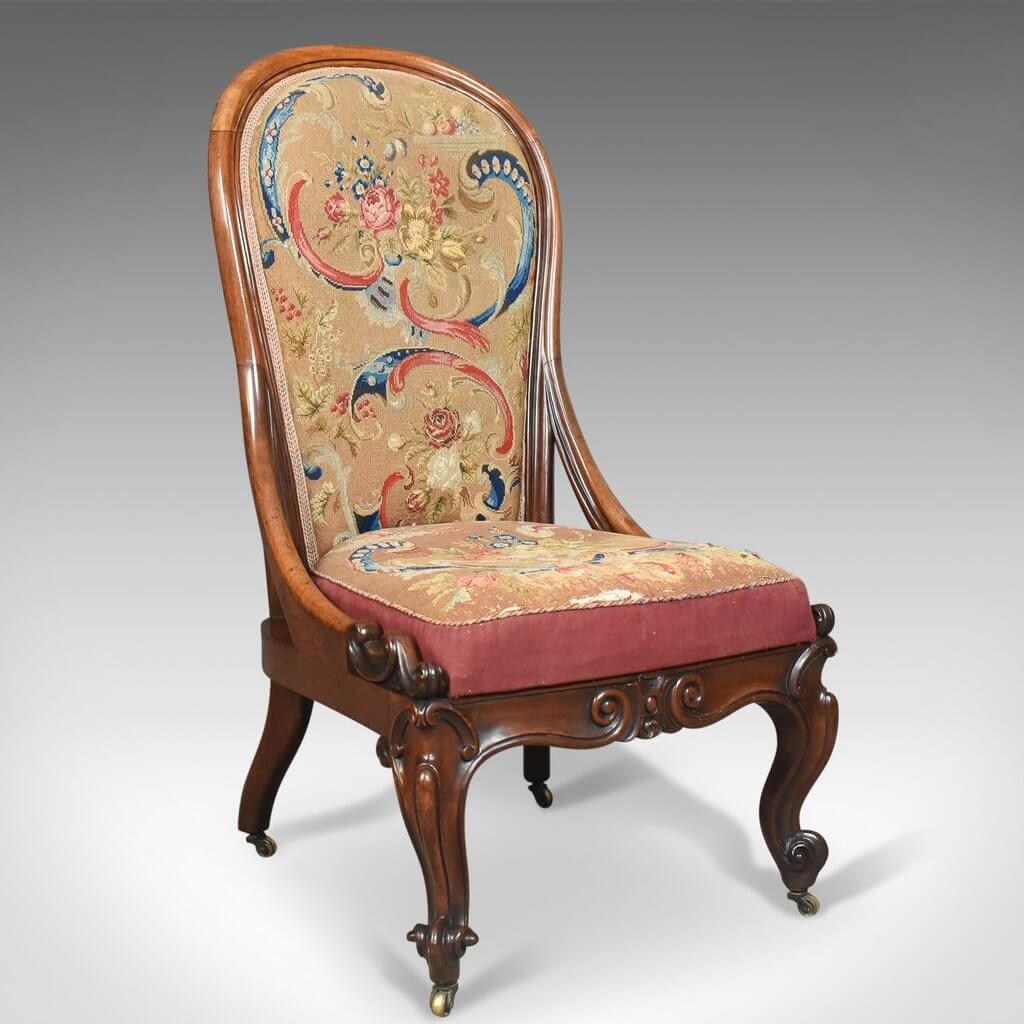 Nursing chair from a selection at London Fine

The design of much Victorian furniture was widely based on older furniture designs. In the first part of Victoria's reign, many design styles were simply copies of earlier ones however in many cases. This period was characterised by more attention paid to surface decoration using gilting, mountings and inlays.

Conversely, many later Victorian designs were more about structure and shape.

Medieval styles such as heavily carved pieces in Norman and Gothic style were commissioned and purchased by the Victorian new rich. Other pieces featured knights and ladies painted onto the surfaces and also heavily encrusted furniture inspired by much older pieces. 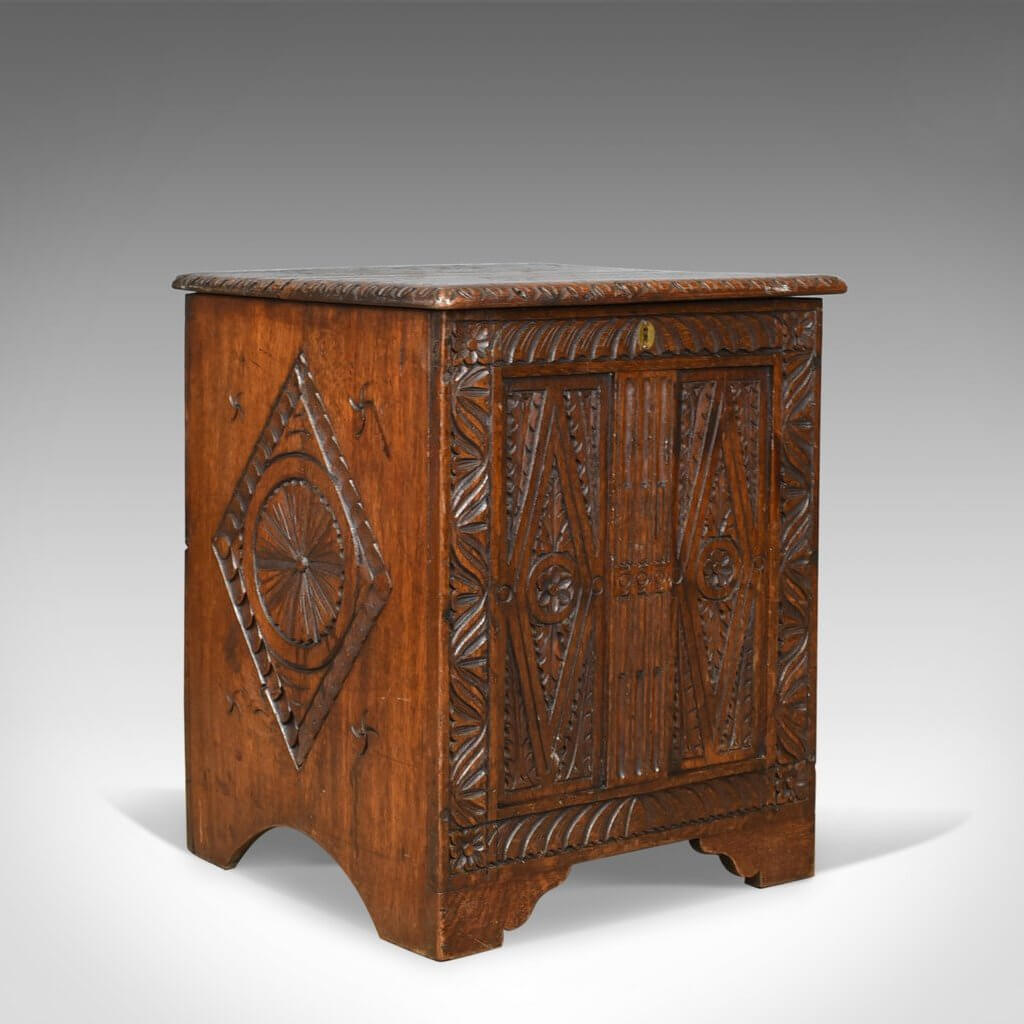 Coffer from a selection at London Fine

Victorian Arts and Crafts furniture cannot be described as being of one single style but the designers shared a common philosophy of 'honesty' of construction and hand-crafted work with one person responsible for all stages of production.

Japanese style furniture was a definite craze because in 1853 Japan reopened its borders and many artists becoming inspired by their unique and interesting aesthetic. Many thought leaders loved the simplicity, purity of form and strong affinity with nature in Japanese art and a group of British designers tried to capture the spirit of the east in their creations.

Many furniture makers also started to use dark mahogany which was becoming widely available as the British empire expanded across the globe. 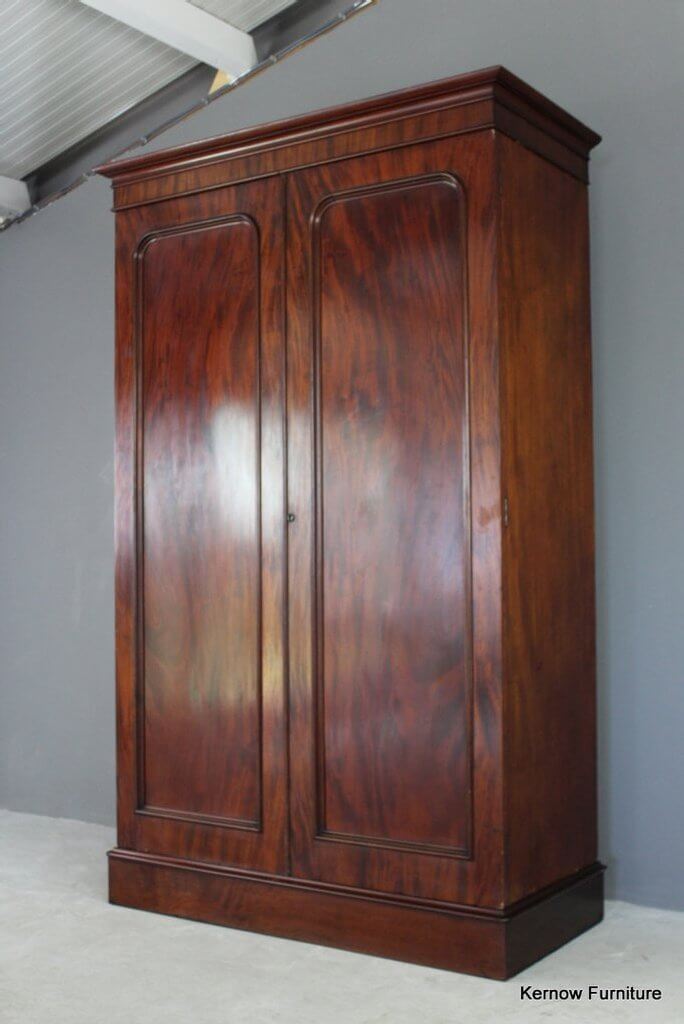 Wardrobe from a selection at Kernow Furniture

How can you identify Victorian pieces?

Due to the fact that the Victorians copied older designs when creating furniture, identifying whether a piece is Victorian or older can be tricky. However, the below tips should give you some pointers about how to identify Victorian furniture.

Victorian furniture was usually made from Walnut for smaller pieces such as small tables and Mahogany for large pieces such as wardrobes, dining tables and bookcases. Sometimes these pieces featured Flame Mahogany veneers and used walnut and rosewood for decoration of for example, table tops.

Chairs were more curved in design than earlier pieces and usually of 3 main styles: the Spoon back arm chair with a buttoned or plain upholstered back rest with scrolled arms and toes, with carved legs; the nursing chair with the same style of backrest but much lower and without arms; and the balloon back chair used around a dining room table with an open circular backrest, with just the base upholstered and an open back. 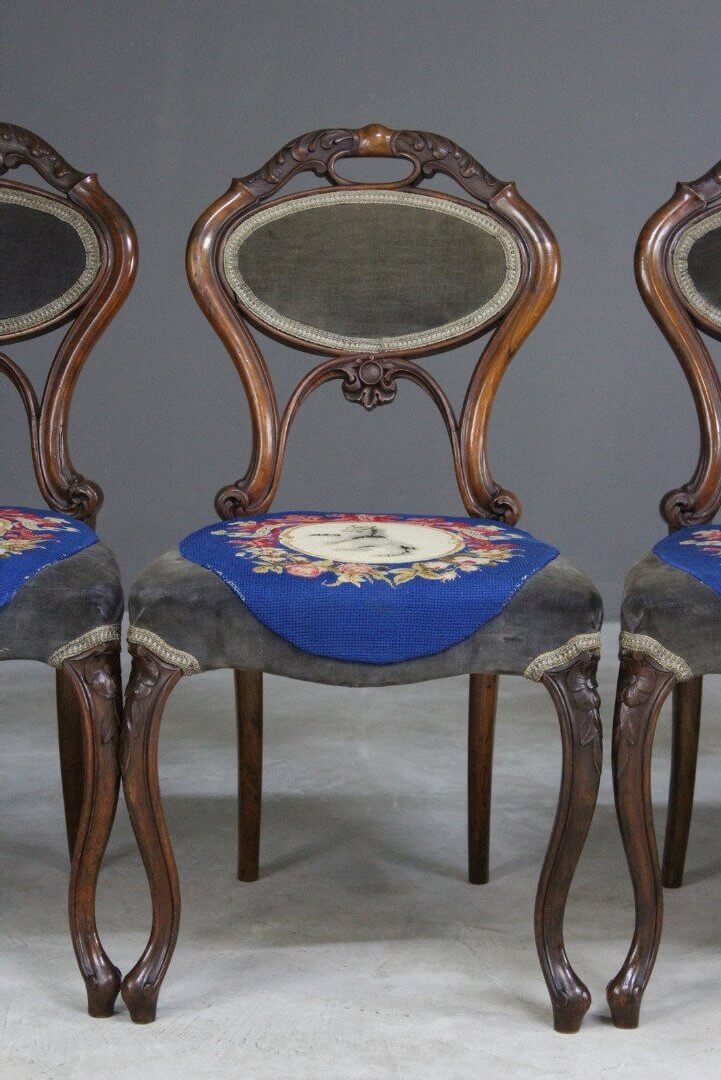 Chairs from a selection at Kernow Furniture

Chests of Drawers were usually made of mahogany (the upmarket version) and pine (more economical) and bow fronted (out swept curving front) or were simple square fronted chests with rounded corners and edges. The feet were either raised - upon shaped block feet or turned bun feet, and were fitted with turned ‘knob’ drawer pulls. As brass decorative handles were commonly used in the Georgian period, if these handles are found on a chest of drawers then they have either been added later or the chest is not Victorian. 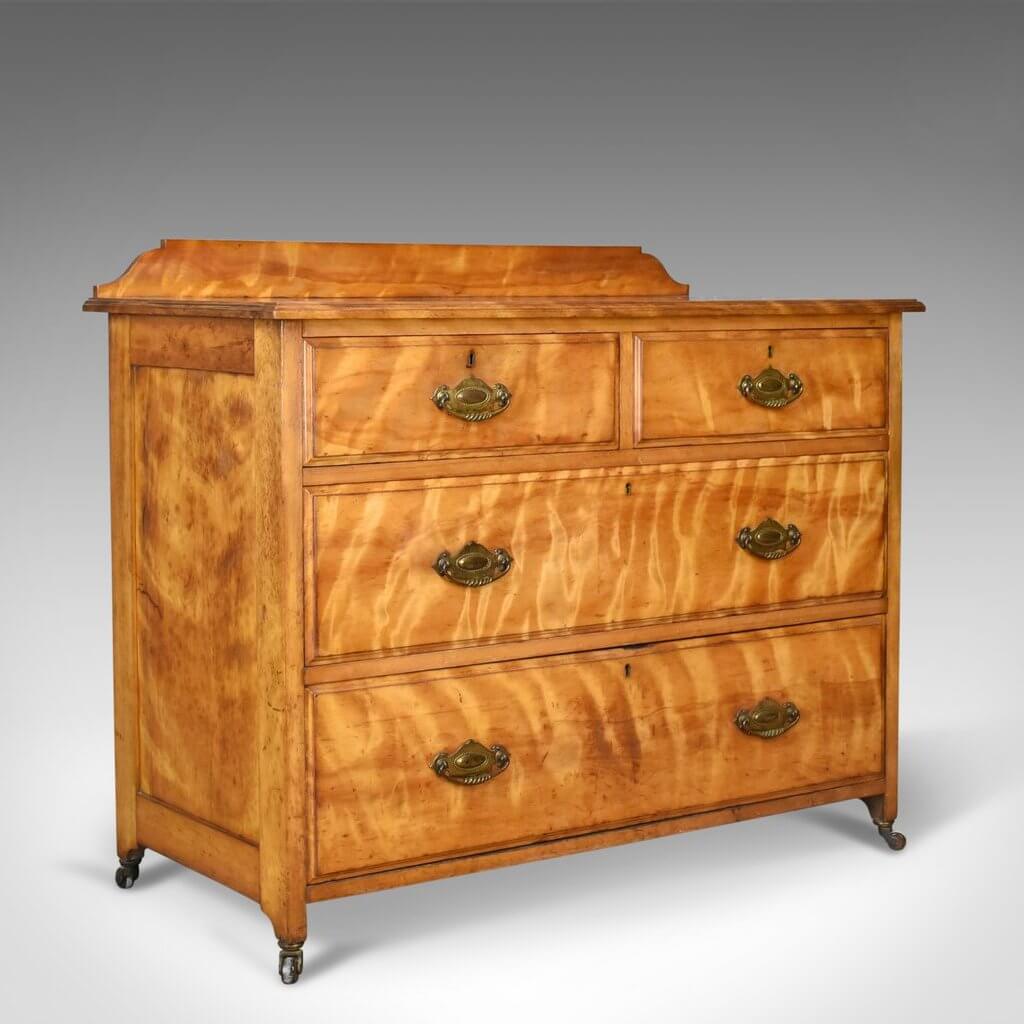 Satinwood Chest of Drawers from a selection at London Fine

Tables were designed in a much wider range of styles during the Victorian period and as such can be more tricky to identify. However common factors in Victorian tables are the following: 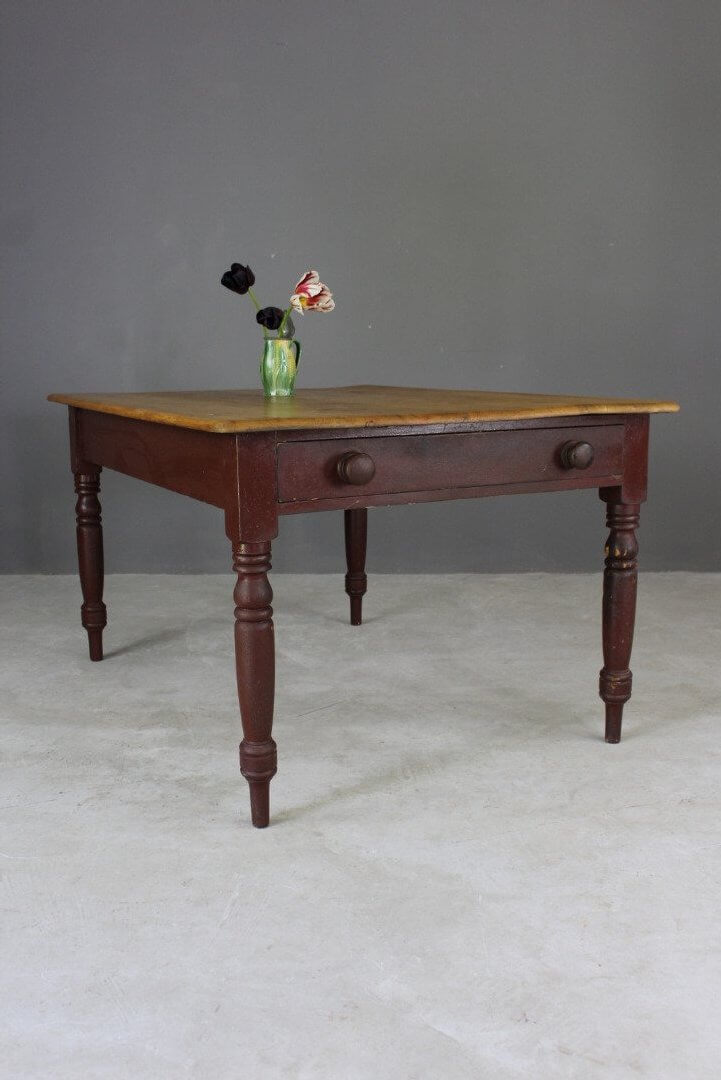 Table from a selection at Kernow Furniture

Washstands would be made from Oak or Pine

Centre tables and games tables were typically finished in Walnut, Rosewood or Amboyna

Often Victorian tables had a very decorative carved base. 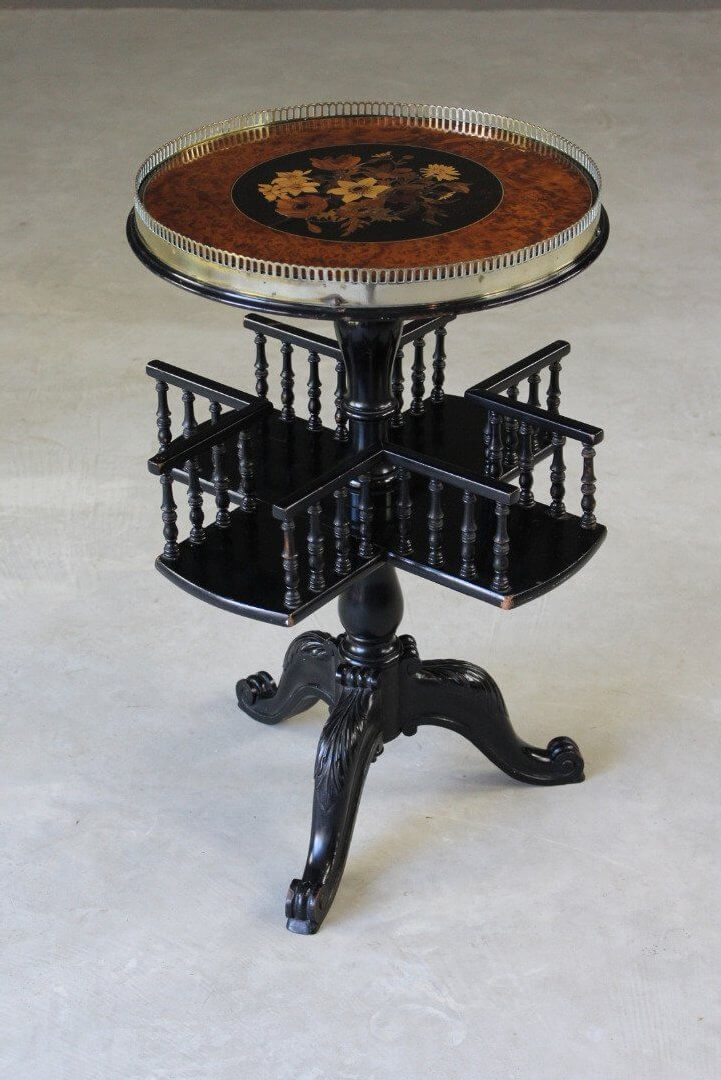 Table from a selection at Kernow Furniture

If purchasing garden furniture, gates and fire baskets - these would not be welded but bound and or riveted.

Nowadays Victorian antique furniture is similarly priced to flimsy throwaway Ikea equivalents so there isn’t a better time to invest in this type of furniture. It is not only more beautiful, but it also holds it’s value or may even be worth more in 10 years than you paid for it.

Antiques are the ultimate ecofriendly product with the possibility of recycling them an infinite number of times. Victorian antiques have become a bargain over the last 20 years because items can be too bulky for a small house, and they aren’t from an era made trendy by the high street (such as 1950s furniture). Victorian antiques are still in good supply.

Victorian furniture is often better made than older equivalents so don’t’ be snobby about the period. Older isn’t always better.

It does take a little more work to buy antique furniture than new, and you have to decorate around it but there are loads of bargains to be found.

The best approach to get your bargain is to find a local auction house or visit a rural antique centre in a market town. A town a distance away from London where there are a number of antique shops such as Hungerford or Moreton in the Marsh are worth the extra miles. 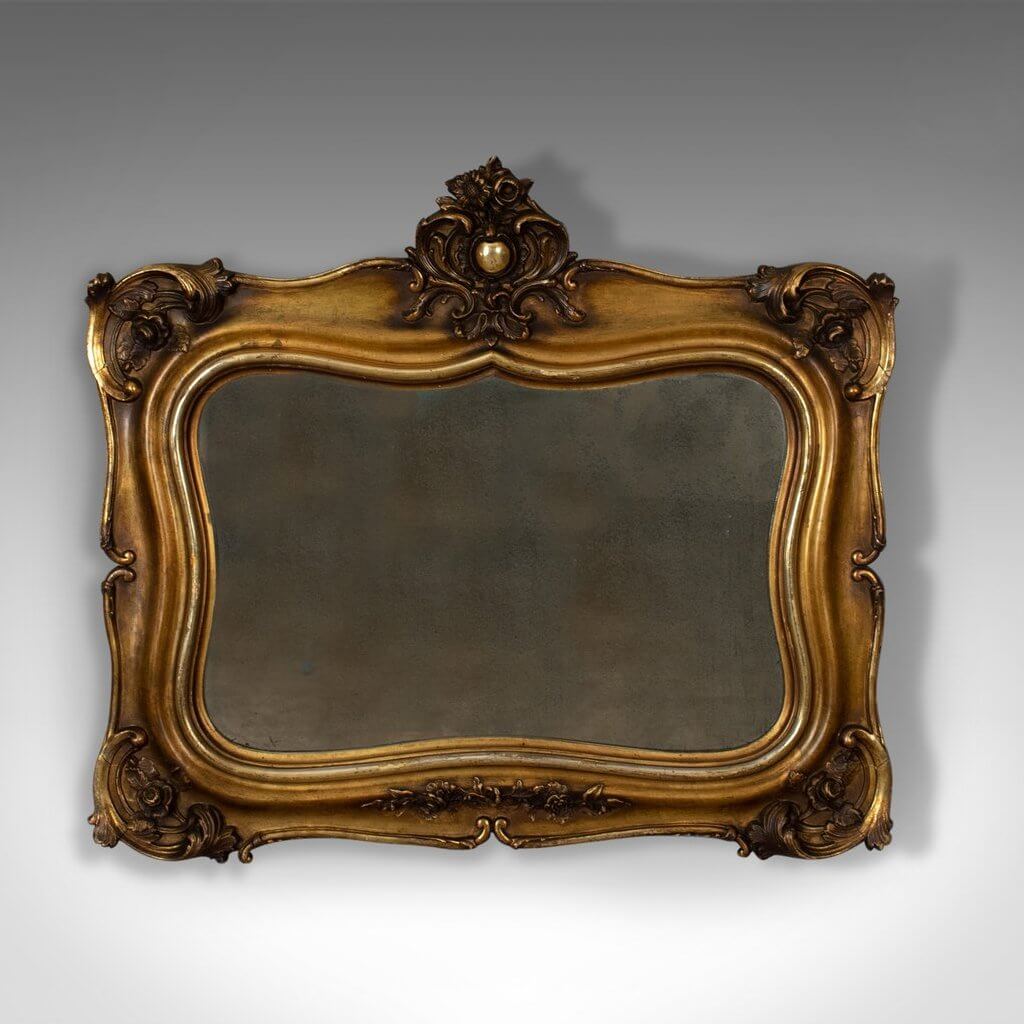 Victorian gilt antique mirror from a selection at London Fine

Take room measurements of the space you are looking to house and take a tape measure to measure the pieces you are considering. Shops and auction rooms have large rooms with high ceilings, so what seems like a normal sized piece in that environment can look massive in your own bathroom or bedroom!

It doesn’t have to be perfect – embrace and love any repairs that have been done if they are done skillfully and be willing to carry out simple repairs such as upgrades of handles and hinges yourself if you’re looking to bag a bargain.

The whole room does not have to furnished in antiques – regard a very special antique as a centrepiece around which to put more simple pieces. 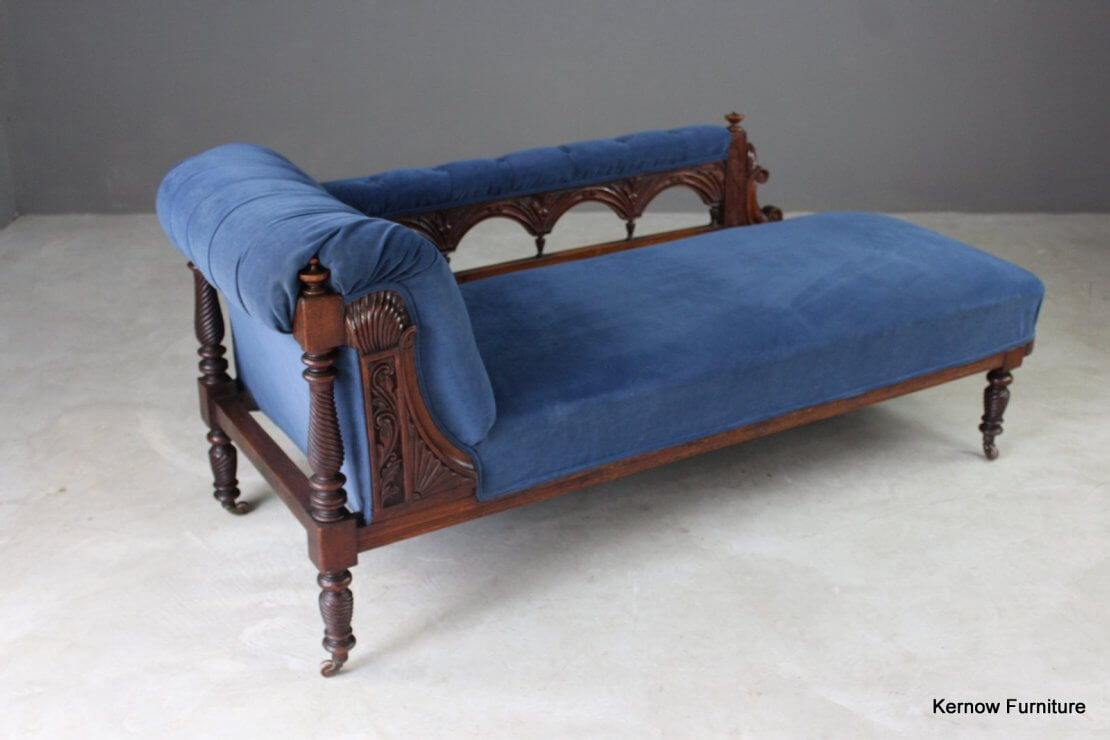 Chaise Longue from a selection at Kernow Furniture