Skip to content - Can you use imperial size bricks with metric blocks when building a new cavity wall?

We occasionally get asked how to incorporate imperial size bricks into a cavity wall build, sometimes because bricklayers tell their customers that this will pose a ‘nightmare’ for them. Buildings which incorporate any other size of bricks than standard metric and standard metric blocks can present a new challenge for inexperienced bricklayers or those who are very set in their ways. Our response is always that it really is quite simple to do, but just slightly more fiddly than using metric size bricks. If the bricklayer is willing to take the time to do it and is quoting the right price for the job, there is no reason why using imperial size bricks are out of the question.

Why use imperial sized bricks at all?

Many customers have no choice but to use imperial size bricks as they are building an extension onto an existing building built out of imperial size bricks. You cannot easily and seamlessly build onto an existing building with a different size of brick from the one originally used. On the other hand, some customers just want to use a great looking brick for a new build because they really like a colour and style, and that brick is only available in imperial sizes because it was never made as a metric brick.

There is no such thing as an imperial brick size, there are variations in regions, however the following imperial size is the most common found with UK housing stock.

Why is using an imperial size brick thought of as complicated?

Builders and renovators worry it will be an issue to build with imperial size bricks because blocks are usually used on the inner skin of the cavity wall and are only sold in a metric size. Therefore when tying a conventional metric block inner skin together with the outer skin (from metric bricks), the two skins are tied together at regular intervals which go from mortar line to mortar line horizontally. If the bricklayer is good, these ties should sit perfectly flat between the mortar lines. However if you are using imperial size bricks with metric size blocks, these mortar lines do not perfectly line up. This is because standard concrete blocks are 215mm high. Three courses of metric bricks with standard mortar lines will line up to one course of blocks. With imperial size bricks (which are 68mm high), this will be a little more complicated as 3 courses will come to 9mm higher than the top of the block. Therefore the wall ties will need to be used at a slight angle sloping down towards the blocks.

Here are the thoughts of a bricklayer

“It can be a little bit of a pain setting the wall ties to start  – most go in fine but you just got to keep an eye out for the odd one but when you look at the finished job that's all forgotten about and it'll be worth it, especially as you will never see the inside course of blocks. As long as the facing bricks look tidy, that’s the main thing. It’s just a matter of checking the ties slope slightly down to meet the bricks. There’s a zig-zag drip feature on a standard tie to stop any potential moisture travelling across the cavity. Depending on insulation, different ties can be used.”

How do you adjust the ascending height of blockwork to brick

To make up the size and alignment differences as you build up, you can also buy 'coursing blocks', which are the same size as metric bricks (or deeper/shallower, depending on block) - and have a very high strength (8.7N/mm2 or more); also you can use engineering bricks which might be cheaper but harder to drill/cut etc. Most block manufacturers will have their own versions. These are useful for making up the blockwork height to meet to the imperial size brickwork.

As well as a general purpose wall/masonry tie there are also some adjustable cavity ties available on the market. These are used to get over various issues, not always because of using imperial size bricks. Sometimes it’s because one leaf of the cavity wall has been built in advance of the other which can create problems with coursing i.e. lining up the courses of bricks or simply for different types of insulation. 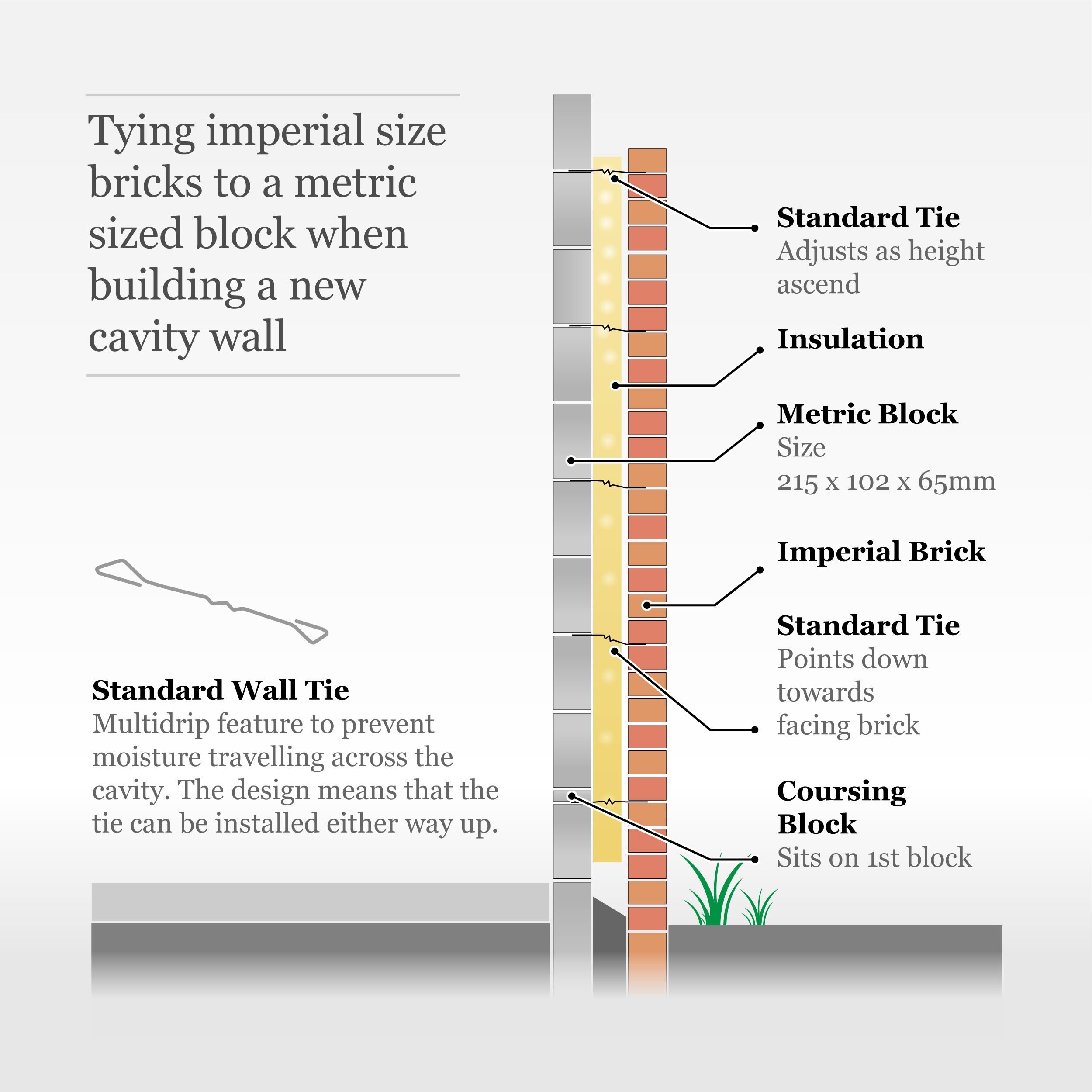 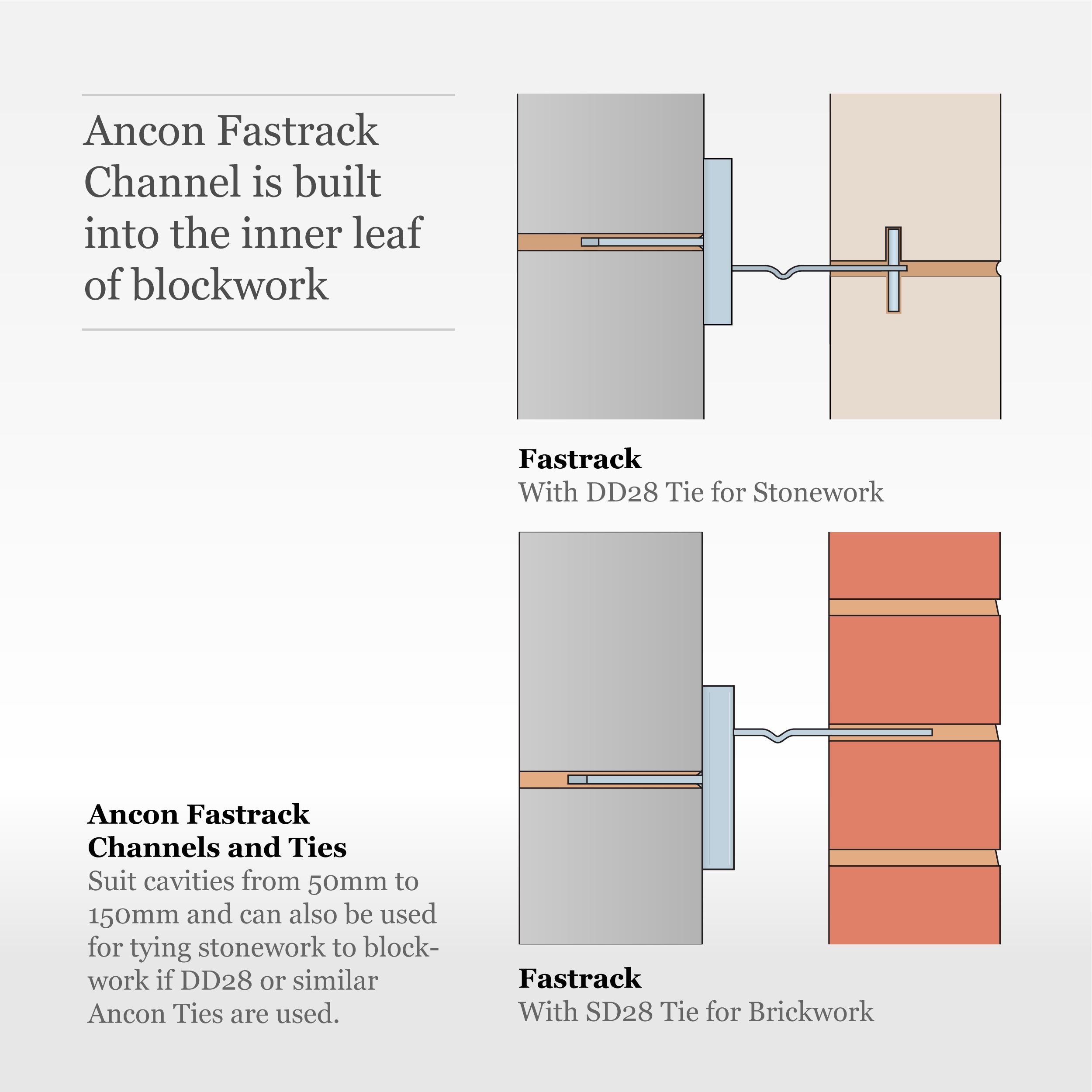