Skip to content - What is Dado and how to use it

Discover and understand how to use Dado correctly in your interior, be it a traditional wooden rail, wallpaper or Lincrusta panel, the Dado is key visual element to a space, modern or period.

Dado is a common feature in buildings, it gives proportion and relationship to space as well as raising certain expectations in an audience.

Why do you need Victorian dado rail for your renovation?

Dado rail is a wooden moulding seen in most Georgian, Victorian and Edwardian houses where period features have been preserved or restored. Many people think that dado rails are simply there to provide a break between the lower portion and upper portion of a wall and an opportunity to use a variety of wallcoverings within the same room. However dado, like all wooden mouldings widely used in interior design, had an important origin and fulfilled a definite function. The Victorians loved and copied the past and were heavy influenced by the study of classics. Many Victorians looked back to antiquity; this perspective was not about withdrawing from a modern world, but engaging intensely with it and this passion was the stimulus for much diverse debate, such as ethics, womens rights, and classical architecture. Therefore, if you're renovating a Victorian property in a traditional style, you will discover that the dado has become synonymous to this era. 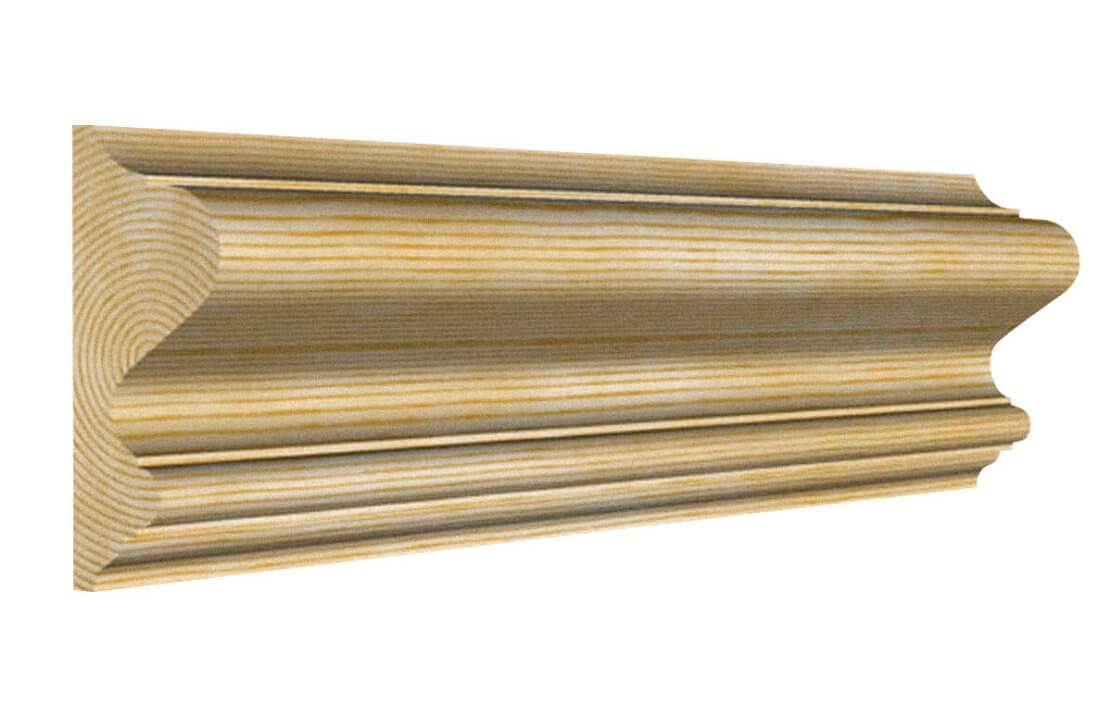 In the Georgian era it was usual to leave dining chairs drawn up to the walls and a dado rail prevented the expensive wall covering from being damaged. By the begining of the Victorian era fashions had changed and dado rails became less widely used but towards the end of the era, the dado enjoying a resurgence as a purely decorative device. The Victorian period was also combined with an expanding middle class and increase in house building (by 1911, 79% of the population lived in newly built towns) therfore most dado will be found originating from the Victorian era - although dado is not strictly Victorian it is the period most assocated with it. 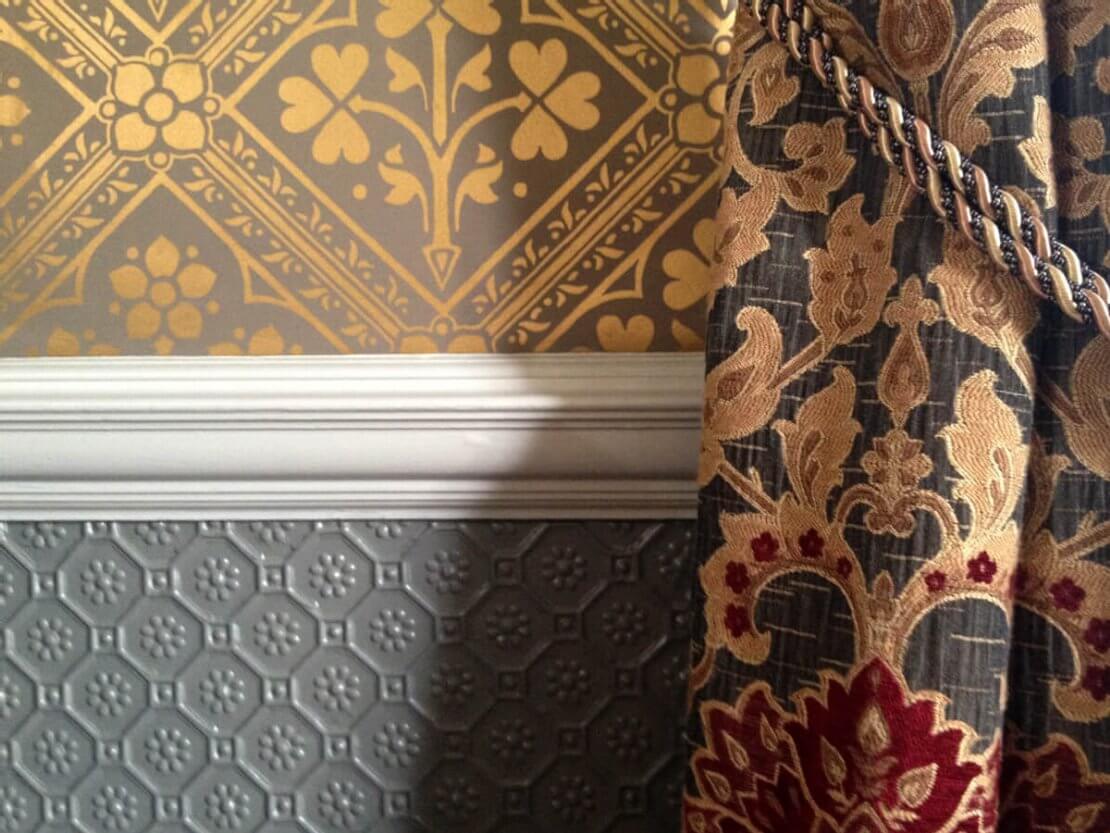 What is the function of dado rail?

Dado rails are commonly positioned on the wall approx 1 metre from the floor, although they can be lower or higher, in proportion to the ceiling height. This dimension usually coincides with the height that chair backs would connect with the wall. However originally, the height of the dado rail was derived from the height of the pedestal of a column of classical order, about one-fifth the height of the room. More recent trends have been to increase the dado height, based on the assumption that its purpose is to protect the wall from chair backs. The term 'chair rail' is also used often used to describe dado rails for this reason.

Where are dado rails used?

Dado rails are usually used throughout the hall, landing and stairs, in all reception rooms and sometimes in kitchens and bathrooms, but not commonly in bedrooms. 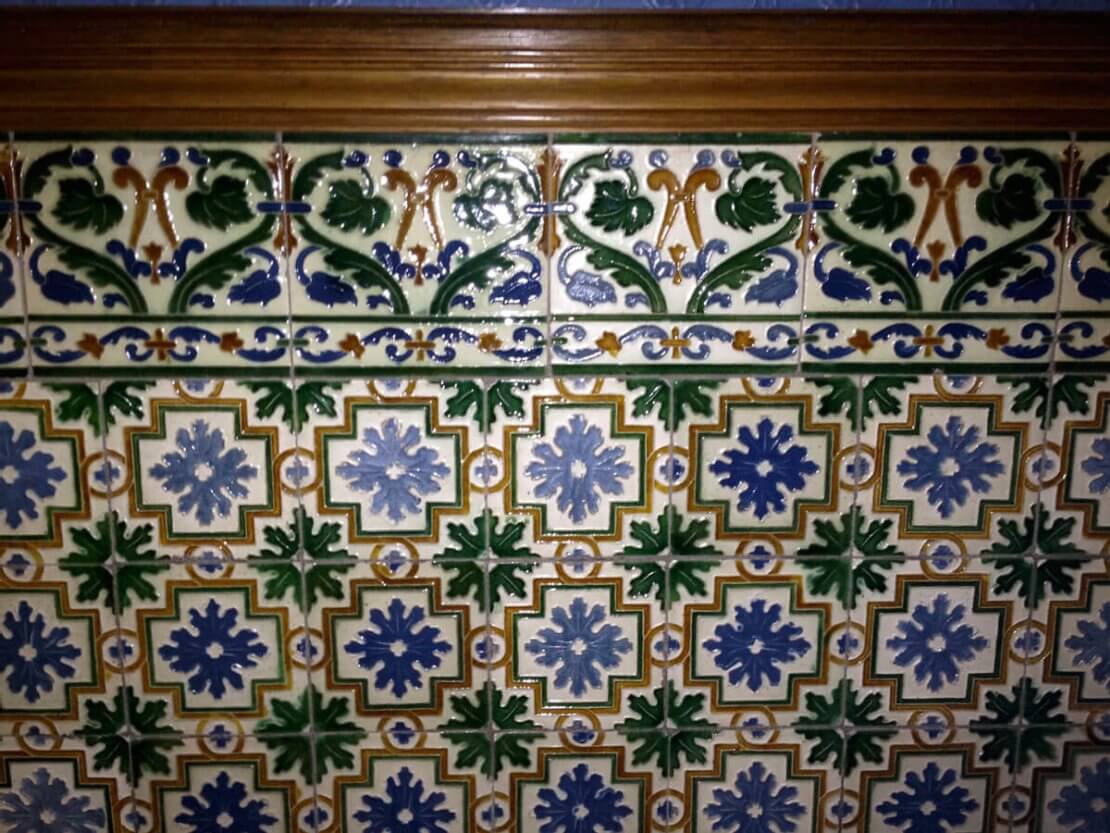 How do you fit dado rails in hallways and up stair cases?

Dado rails are commonly used in all downstairs reception rooms and throughout the house in hallways and on staircases. In standard rooms where the dado is fitted around the perimeter of the room, this is fairly simple only requiring 45 degree mitre cuts where two pieces of dado join. However when reinstating or repairing dado that has been removed or damaged from staircases, this can be a little more complicated because the dado rail not only would need to follow the trajectory of the stairs, and at the same height as the handrail, running parallel to the stairs and following the angle at which they ascend, but would also need to travel around corners on landings, and on some staircases, may need to follow curves. Originally these curved dados would have been created on site by a skilled joiner.

For 90 degree corners you need to cut the dado at 45 degrees where it meets the next piece like in any other room, however you need to cut this angle on the dado whilst it’s angle ascends parallel to the staircase. It is worth taking your time to make these cuts as accurate as possible. If the first cut is done accurately, you can use these pieces as a template to make all of your other cuts as staircases tend to ascend at the same angle from floor to floor, even if there are multiple landings.

Key tips are to measure accurately including the lengths and the angles, and use a sharp saw when cutting your piece of dado – the job is more than do-able with some time and patience. Remember to always order a little more dado than you need for your requirements in order to allow for any mistakes/wastage.

If your staircase features curved walls you may need to source your hallway dado rail from a manufacturer that can create rising and descending curves on curved dado pieces for you. This will involve you providing them with an accurate template of all dimensions, angles and sizes, placing your order and then installing the items produced once they are supplied to you, crossing your fingers that no mistakes have been made by you or them. 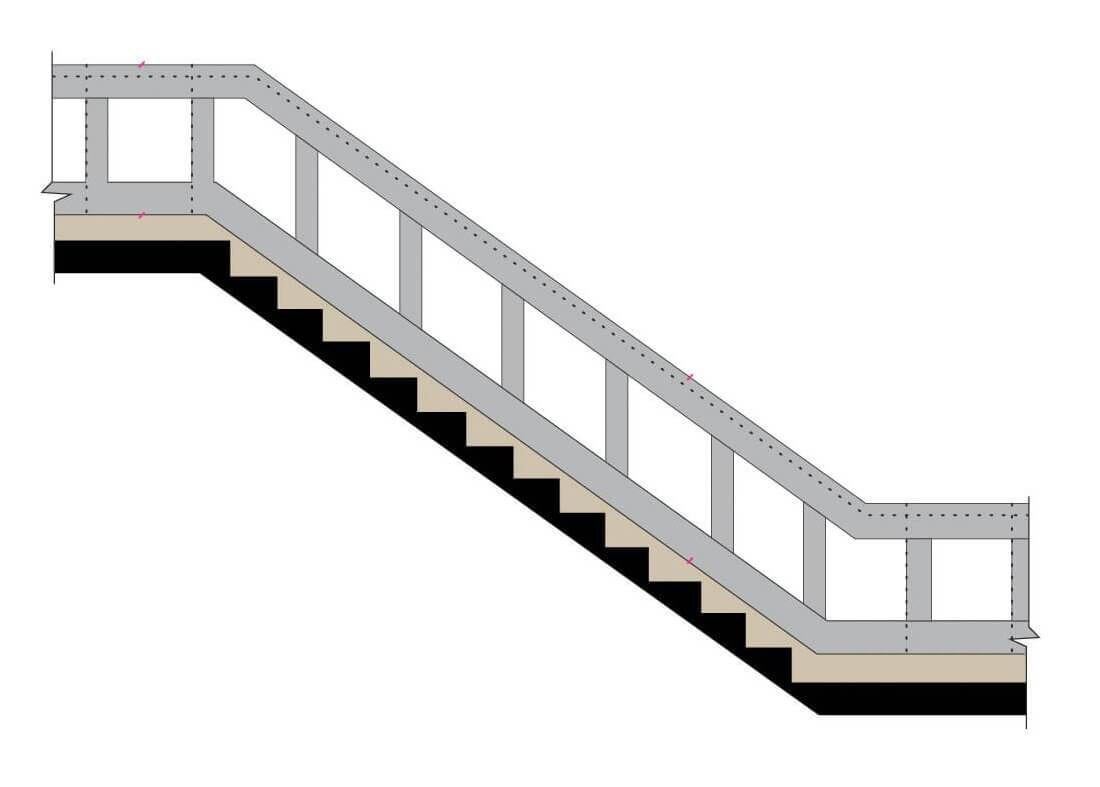 If you are looking to use a decorative relief wallpaper below your dado rail, Anaglypta or Lincrusta are good choices. Lincrusta is much more robust and hard wearing, being the weight of lino usually used on a floor, and a great choice for a hallway with lots of traffic where bags and bodies regularly brush the walls. Anaglypta is the weight of a traditional wallpaper and is available in paper or vinyl depending on the pattern, and can easy get damaged in high traffic areas.

When purchasing either of these as dado panels, the top and bottom of the design will usually feature an area with a small repeat pattern. This enables the paper to be trimmed down to the correct height to fit between the skirting and the dado without interrupting the main pattern.

Dado rail colour schemes will vary from house to house however usually dado is painted the same colour as all of the interior woodwork which is usually either white or a few shades darker than the walls.

Another wall covering often topped off with dado rail is wall panelling. This is becoming more and more popular, due to the accessability in terms of ease of fitting and cost of purchase of MDF wall panelling kits. These are quick and easy to install and cheap to purchase, compared to the oak versions. These wall panelling kits are available in many different designs and the most popular choices consist of open backed panels where the plastered wall can be seen within the squares or rectangles around which the panelling is designed. The versions that are 800mm high perfectly lend themselves to being topped with dado rail whilst skirting board is used beneath the panelling. The ideal finished height for these three components is around 1.1 metres. Once painted, the skirting, panelling, plastered wall behind and the dado all look like they are one single piece although they are made of three different materials and 4 individual components. These really do a good job of replicating expensive Victorian wooden wall panelling and look especially stunning when painted in a rich deep shade of blue or grey.

A note to Americans is that in the UK we call Wainscot Panelling but the two things are basically the same. 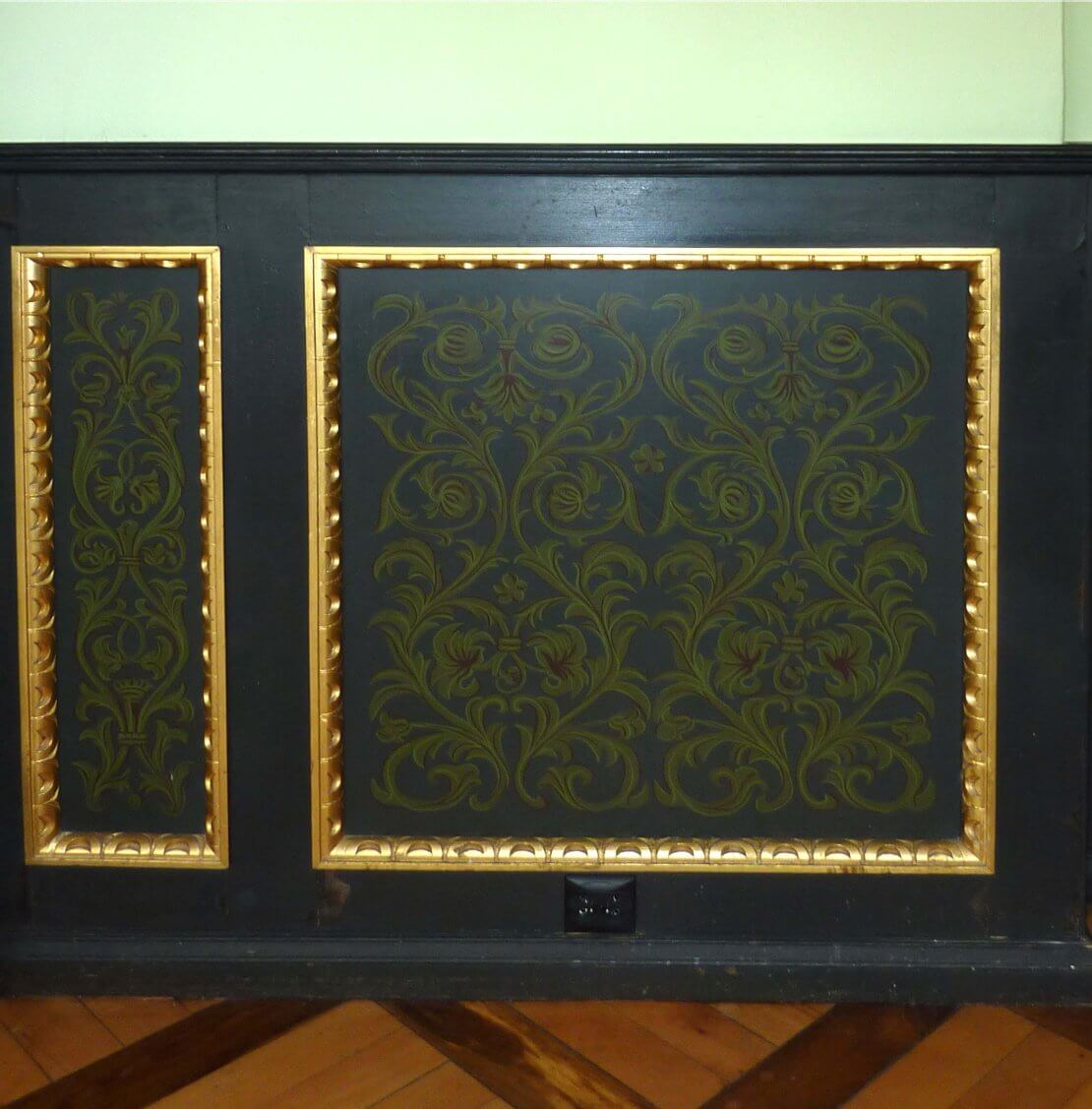 Can dado rails be made of other materials than wood?

Plaster dado rails are also available. These have the benefit of expanding and contracting at the same rate as the plastered wall, unlike wood which can crack as it matures and dries out in centrally heated rooms.

Ceramic dado tiles are used in rooms that are tiled.

Where would you use Victorian ceramic dado border tiles?

Dado rails are often continued into bathrooms, kitchen, porches and other tiled areas of the house. These dado tiles have been designed to complement the style of the wall tiles and echo the profiles of wooden dados. Often a full set of ceramic wall tiles would be chosen to reflect what was on the walls elsewhere in the house. So you’d start with a skirting tile at the bottom, continue with plain or patterned single or multi coloured tiles, sometimes with 3d relief designs, finishing at the dado height with a dado tile.  Often egg and dart tiles would also be incorporated to break up an area of plain tiles. In porches these would be chosen in strong colours and often with eye catching designs. In kitchens and sculleries something more muted would be chosen, in a white or off white.

Tiles with dado profiles can be purchased in many tile ranges and materials, not only ceramic glazed tiles, but also in travertine and marble for example for use in bathrooms. 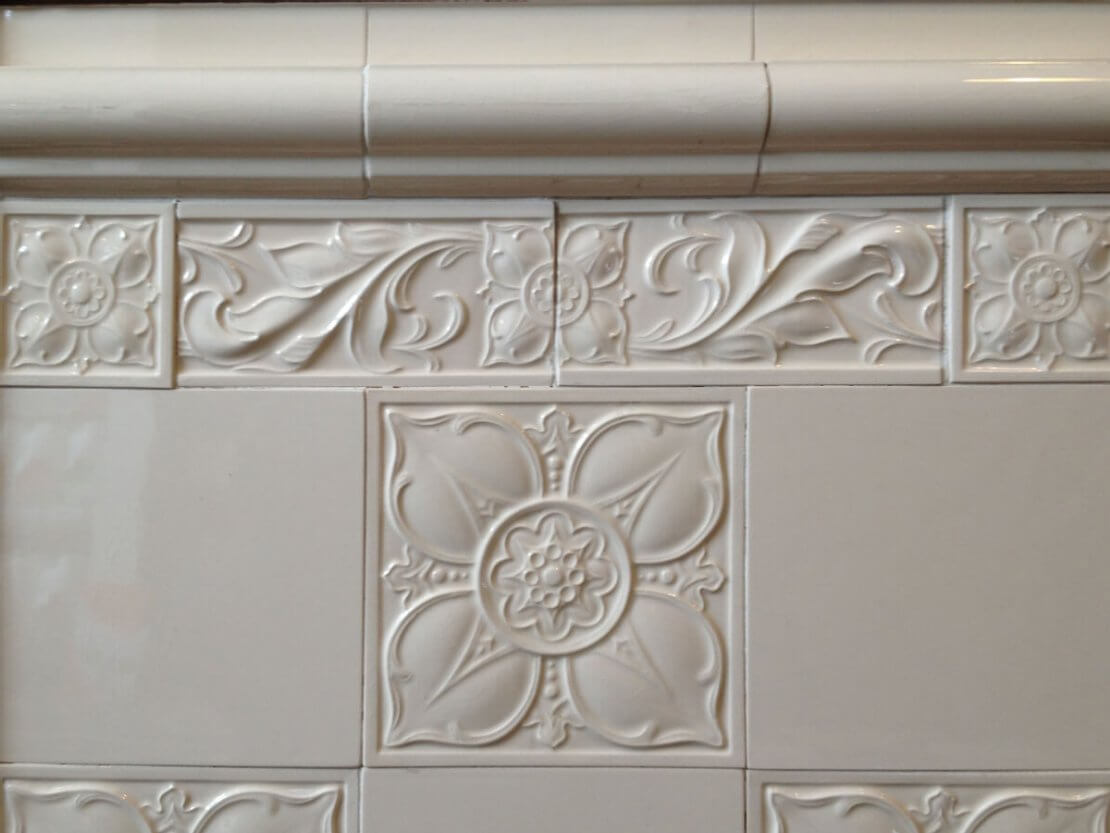 Help! I have original dado in my house and a small portion of it is damaged – it doesn’t match any of the off the shelf profiles

Bespoke dado can be created if you require only a small amount to match existing dado. This is by no means a beginners diy job and you’ll need specialist tools such as a router to undertake this task. However it will definitely be a rewarding job if you are successful in creating your own bespoke dado profile.

Dado rails are also sometimes applied to a wall in non traditional interiors with no relationship to period features, with the purpose of providing protection to a wall. This type of usage is common in environments where walls are subject to much wear and tear, such as shopping centres and hospitals. In such cases the height of the rail is often 1200 mm or even 1500 mm from the floor and serves a functional rather than aesthetic role.