When choosing the right type of wallpaper for a Victorian house, and its different rooms, it’s important to understand how wallpaper was used in the Victorian era and to try to pay homage to that in order for the interior decoration to be in keeping with the age of the house.

A Guide to Reproduction Victorian Wallpaper

In the Victorian era, wallpapers and wallcoverings became possibly the most important element to interior decoration as they became accessible for the majority of comfortably off householders due to their wide range of designs and varying methods of production so that both the higher and cheaper end of the market could be satisfied at a paletable cost. This was due to the introduction of mass production techniques and the repeal in 1836 of the wallpaper tax. 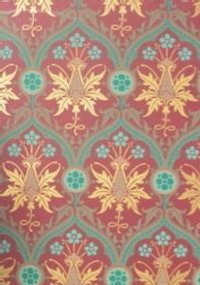 William Morris was of course highly influential in Victorian wallpaper design. His first wallpaper designs were the Trellis, Daisy and Fruit patterns in 1864 but these were expensive and were products really only for the elite. The average householder would have watered down versions of the work by the prominent designers of the time. 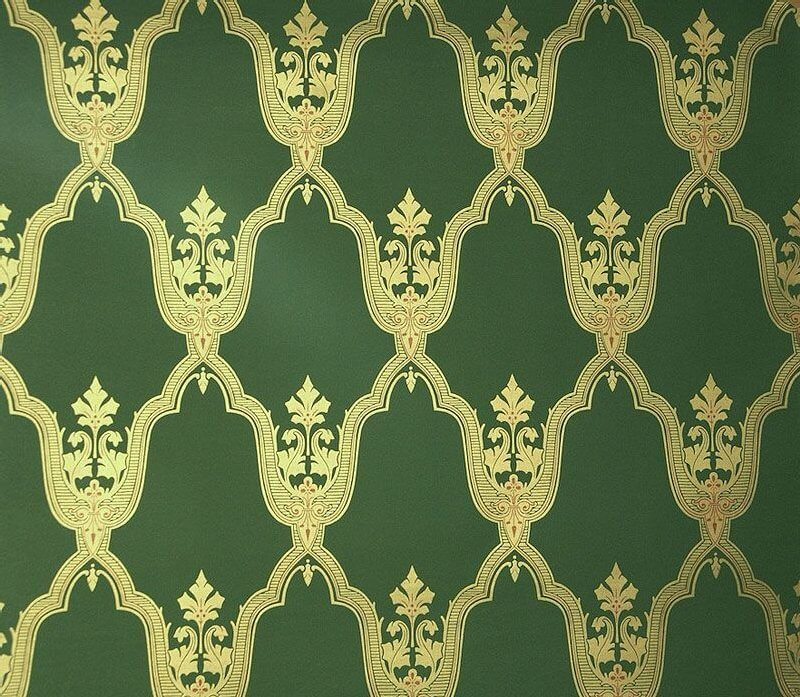 With the introduction into rooms of the dado rails and picture rail mouldings to divide the room up, which was deemed to be the epitome of artistic taste, so wallpapers came to be produced in sets of three, one for cornice to picture rail, one for picture rail down to the dado rail and the last for the bottom portion of the wall under the dado rail. This is rarely available or used nowadays and people tend to choose one feature wallpaper and complement this with paint colours. 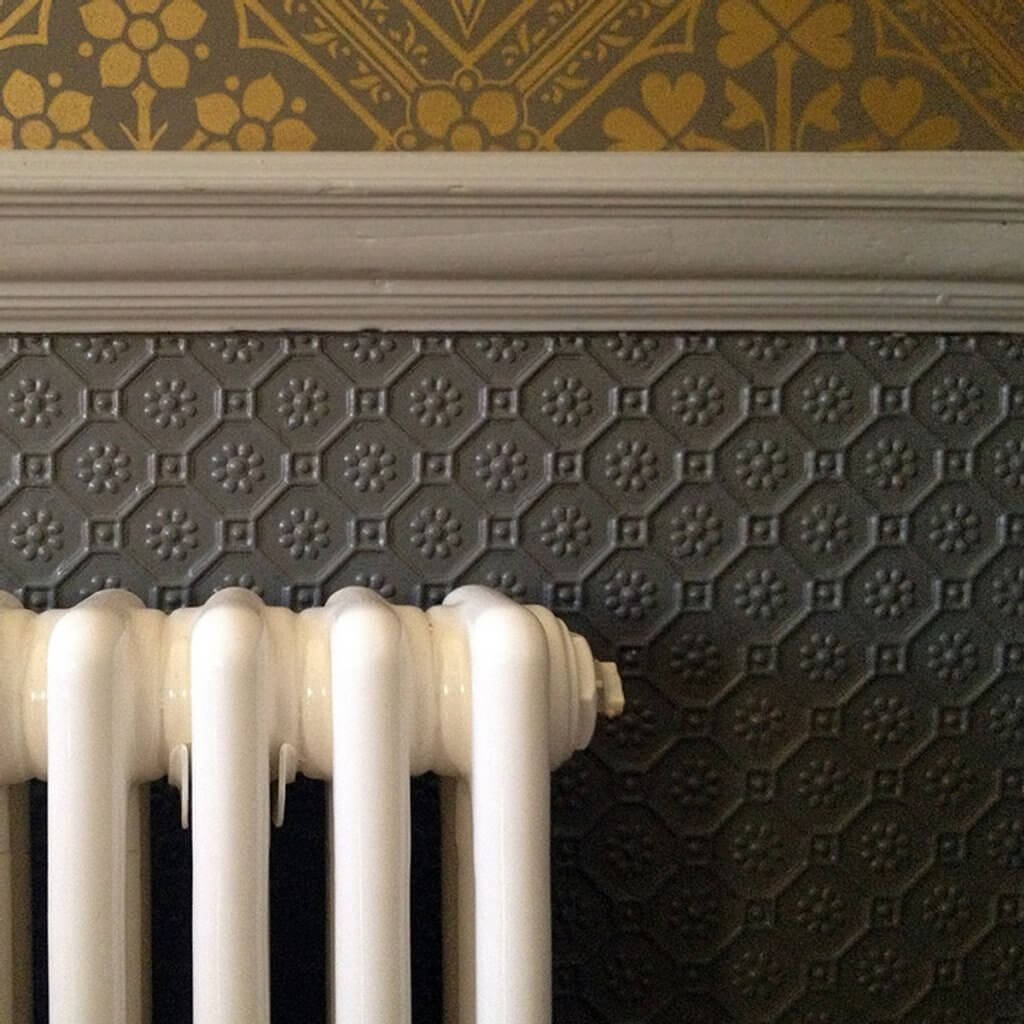 Popular designs of the time included Japanese motifs either copied or imported, or relief papers that imitated stucco, embossed leather or wood panels. Relief wallcoverings, including Anaglypta, were widely used for the area below the dado particularly in hallways and stairs as they were hard wearing. The colours that the Anaglypta were painted were conventionally darker to lighter as you progressed up the wall. Anaglypta was also widely used as a ceiling paper with imitation Jacobean and Elizabethan ceilings with special designs for the frieze area to mimic fancy plasterwork at a low cost. 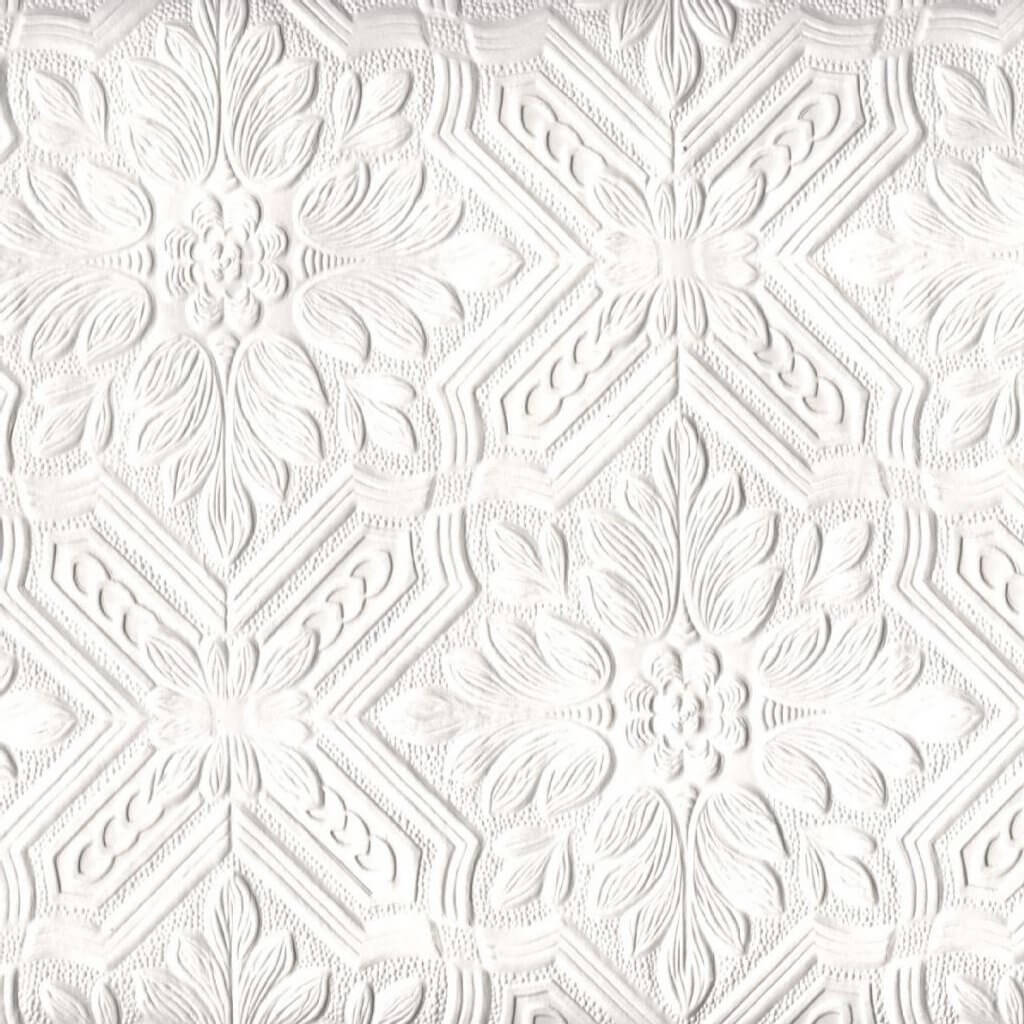 Dado rails continued to be installed in the halls and stairs of new houses up until around 1914 and is an important period feature in the public areas of a house. Towards the end of the Victorian era a simplified approach was taken with Anaglypta painted white often used as a continuation of the ceiling and as a contrast to the bold patterned Victorian wallpaper used below.

What rooms should be wallpapered?

Wallpapers were used mainly in the most prominent rooms of the house, for the benefit of showing visitors the householders wealth and good taste, namely the living room or parlour, dining room and the most important bedrooms. Our historical collection of wallpapers features some beautiful patterns that will suit any of these rooms and make them into a special place. Victorian wallpapers come in a large variety of designs, colours and finishes to suit all tastes and houses including relief wallpapers, velvet wallcoverings, victorian wallpaper borders, floral wallpaper and damask papers with of course the wonderful William Morris as the trailblazer with his prolific collection of William Morris wallpapers.

The Victorian Emporium sells the full range of beautiful Victorian historic wallpaper patterns for every room in your house. We also sell Anaglypta relief wallpaper for hallways and reception rooms giving that genuine period look.

I love the idea of using wallpaper as a feature in our Victorian townhouse and always good to get ideas for the right period paper.

​It’s not a correct statement to say wallpaper was used mostly in the primary rooms. You can see wallpaper and wallpaper fragments in most rooms of homes in the 19th century, particular in the late 19th century. Scour through thousands of photos from the era and you’ll see paper even in the poorest of homes.

Also, It was mostly was to be current in the style of times, show good taste and good artistic eye far over this misnomer that everything was about showing off your “wealth”.

Thanks for your contribution Weird Quirks. Fair point, wallpapers might have be found in practically any room but papering a room was (and still is) governed by budget. Wallpapers as we know them, were used mainly in the most prominent rooms of the house. During the 19th century before the wallpaper tax was abolished (1836) people would bypass the tax by purchasing untaxed plain paper and having it hand stencilled (ironically, a process now more expensive than mechanical printing seen today). To display ones ‘good taste and good artistic eye’ for many, required wealth. Upward mobility and expanding middle class was something relatively new and provided conspicuous consumption only previously enjoyed by aristocracy.

Fontainebleau wallpaper with colourful birds and flowers in choice of two colourways
£381.00 (+TAX)