A bathroom was an innovation of the Victorian era. Previously a tin bath in front of the fire was used in the bedrooms of the grander houses. The maid or servant then had the onerous job of transporting hot water from the kitchen range where it had been boiled on the stove top, up the stairs and into the bath, which was both arduous and time consuming. Often the water was not even still very hot by the time the bath had been filled and once used, then had to be emptied again. Thankfully most people did not take baths every day.

When did bathrooms first become a dedicated room in the average house?

It was not until the 1860s, when there were improvements to the water supply and drainage, that bathrooms began to be built into new houses. A bathroom was only included as standard from the 1880s. Ironically it was the middle classes who embraced the concept of a bathroom most fervantly as the upper classes had their servants on hand to traipse up and down with hot water so the inclusion or not of a bathroom in their house had little bearing on their comfort. So the introduction of a bathroom with running water was a blessing for the maid as well as the gentlemen and ladies of the Victorian era.

In the smaller working class houses, baths were usually taken once a week with the bath placed in the kitchen in front of the fire, and the head of the house taking the first bath. He would be following by any male members of the household in order of age (oldest first) followed by the females, with babies last to bathe. The water would be so murky by the time bathtime was over that it would have been very likely to have the “baby thrown out with the bathwater.” Although in the Victorian era most of these houses now had running cold water, they would not have indoor bathrooms for many decades. These were usually added on as ground floor extensions to the rear of the kitchen in the mid 20th century.

Early Victorian bathrooms tended to be simple, functional and small. This lack of importance given to bathrooms should be borne in mind when planning the design of your period house if you wish to remain faithful to the period.

Bathrooms tended to be small and functional and baths and sinks enclosed in wooden enclosures with pipes boxed in so as not to appear too out of the ordinary. Often they had a fireplace, cornicing and other pieces of small furniture along with metal baths and wash basins. The inside of the bath was usually painted white or off white in the early days. However glazing of sanitaryware became more common in the 1880s for hygiene reasons and for the same reason pipes were left exposed. 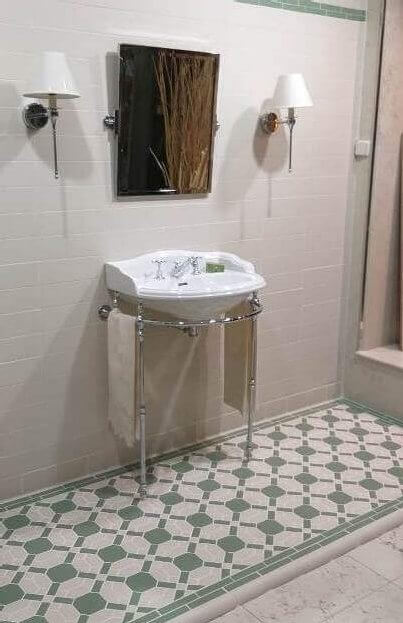 The typical bathroom was decorated fairly spartanly with tiling, usually white or off white, sometimes with elements of black; gloss painted walls or varnished paper above the dado level; simple tiles, linoleum or bleached pine floorboards on the floor for ease of cleaning. Although decorative coloured tiles and panels do look attractive on the walls in a period bathroom, they are not typically Victorian. The Victorians liked to show off and would only go to great expense in their public rooms, not the private upstairs bathrooms.

Other decoration in the bathroom was mainly related to functionality with copper or brass pipes and taps, functional light fittings and a minimum of essential bathroom accessories. 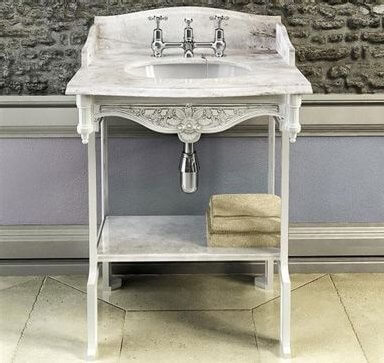 Many of the middle class houses had decorative wash stands and wash basins in their bedrooms with new Victorian plumbing which is relatively unchanged today. The wealthier the household the more elaborate or well fitted these became. These can be easily imitated in the modern period home with wood and marble vanity units. These are functional, providing good storage, and faithful to the Victorian era and style. Standalone bathroom sinks came later in the Victorian era and Edwardian era when bathroom fixtures were not disguised as piece of furniture. The classic porcelain pedestal sink is a good example of the type of Victorian bathroom sink that would have been deemed very modern at the time.

What types of baths were found in Victorian bathrooms?

The early Victorian baths tended to be enclosed in wooden housing making them look more akin to furniture and less alien to the householder un-used to a modern bathroom. 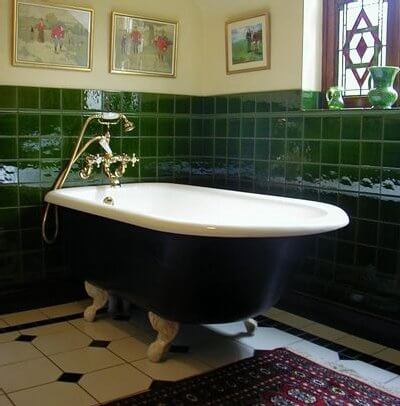 Free standing roll top baths had been used in grander houses during the eighteenth century but without the plumbing and taps. It was natural that this style would eventually be introduced to the Victorian home. A typical British roll top bath would be single ended with ball and claw cast iron feet with tap holes at one end of the bath. They could be anything between five and eight feet in length either parallel sided or tapered like a coffin in shape. The larger ones could have shower attachments and were known as plunger or canopy baths.
Roll top double ended baths and slipper baths with the taps centrally positioned are French in origin; French style baths tend not to have legs (or feet) but sit directly on the floor. Slipper baths whilst they vary in length, are smaller than other roll top baths and are more upright. The double ended roll top baths are easily distinguishable as they do not have tap holes. The plumbing would be free standing outside of the bath. 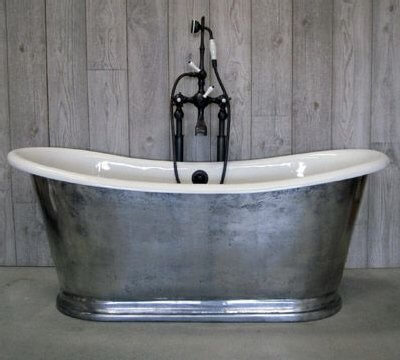 The most stylish baths were roll top bateau and boat baths. The original restored cast iron and enamelled baths sell for thousands of pounds and are as popular now as when they were first developed between 1850 -1900. Many good reproductions are also available in cast iron, resin and acrylic.

Indoor toilets did not exist for most people. In newly built urban areas it would not be unusual for one hundred houses to share one ‘privvy ‘, often a deep hole or pit, dug in a shared yard, with toilet seats arranged over the pit.

In wealthier households, toilets were housed in a separate room and did not become common until the 1870s when the urban sewerage system expanded and the water supply and drainage systems also saw significant improvements.

So it was towards the end of the Victorian period that a single ceramic pedestal with a washdown system with water supplied from a cistern first appeared. These small rooms were always situated next to an outside wall to allow for the soil pipe. By the beginning of the 20th century many of these used a high cistern with the flush controlled by a pull handle on a long chain. Most toilet seats were made from hardwood.There are good reproductions of many of the Victorian toilet styles on sale today - this is one product that is not a popular choice in the reclamation market!

As modern toilet paper was not introduced until the 1930s, so newspaper was more commonly used. However there are limits to how faithful a renovation should be and a traditional type toilet roll holder is a nod to modernity that can be forgiven.

Add a touch of style and authenticity, with a hint of modernity, with a traditional column style heated towel rail or a Victorian cast iron radiator for a warming finishing touch to your period bathroom.