Skip to content - How To Use Victorian Wrought Iron Railings

The use of iron to create decorative Victorian wrought iron railings increased during the 19th Century. This is because the middle class Victorians used the interior and exterior décor of their homes as a means to impress visitors with their prosperity and good taste. As the first impression of the home would be made by the exterior elements, with the railings at the boundary of the land, these were given much importance as a means to impress. The main function for the Victorians of railings and gates at the boundary of their property was to mark where one property began and another ended and separate the homes from the public highway and provide a level of security from unwanted intruders. This is the reason why many of the traditional railing designs feature a spear like top. These would be very tricky and uncomfortable to climb over and just this fact acts as a good deterrent to trespassers.

Most terraced houses in England would have had cast iron gates and railings – it was an era when people valued the time and trouble it took to create decorative and beautiful items for their own sake. However many railings and gates were removed during World War to be melted down to help the war effort although houses with a basement level or where the railings protected people from the danger of a large drop, the railings were left in place for reasons of safety.

Some Victorian railings consist of a mixture of wrought and cast iron. Wrought iron is very strong therefore it was used for the railings and main framing, and cast iron used to make the decorative panels. 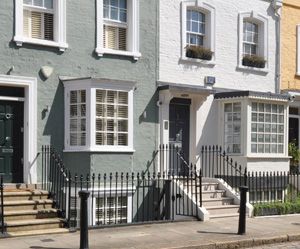 Should I buy new or reclaimed railings?

Many decorative Victorian railing designs are available nowadays both as newly fabricated reproductions of original Victorian designs, and also there are many sets of railings available to buy from reclamation yards. The issue with reclaimed railings is that the paintwork is often in poor condition meaning that they will need to have rust and flaking paint removed before being completely sanded down, primed and repainted. Often this is more trouble than it is worth. In addition, reclaimed railings may not be on sale in one place with matching gates and accessories meaning that lots of hunting elsewhere may need to be undertaken to fulfil all of your requirements and find items that will marry well together. 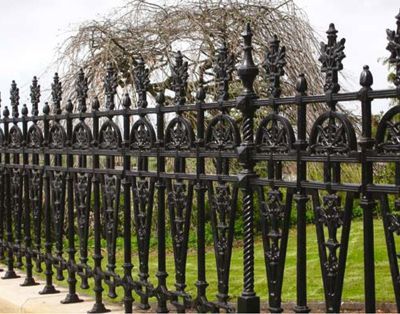