What an ideal location for period living, especially if you are a rail enthusiast with a fascination for some of the Victorian era’s more quirky architecture! St Pancras Chambers is one of London’s latest apartment conversions. Originally part of St. Pancras Railway Station and the adjoining Midland Grand Hotel (now the magnificent five-star Renaissance Hotel), St. Pancras Chambers is a complex of 67 individually designed apartments carved out of the interior of Gothic revival architect George Gilbert Scott’s Grade 1 masterpiece fronting London’s Euston Road. 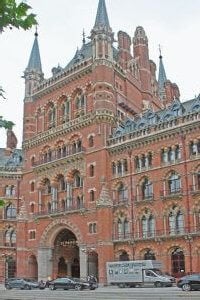 The apartments occupy the top five floors of this iconic building, which began its life in 1873. However, until the developers moved in a few years ago the building had lain abandoned for 75 years so it was a major undertaking of design and ingenuity to create such high calibre living spaces within a building boasting a maze of gigantic vaults and timber roof frames.

Perhaps one of the most spectacular apartments belongs to Peter Tompkins. Occupying two floors, it incorporates the main access to the service tower of St. Pancras Station’s 80m high landmark clock, which cleverly helps to create a living room with a ceiling 10 metres high, mezzanines and balconies - all with unparalleled views across the Station. Peter says: “Most of the apartments were sold off-plan so it wasn’t until our first winter of occupation that us owners began to realise just how cold they could be. With the original single-glazed lancet windows retained in line with English Heritage requirements, even after installing 7 radiators in one of my rooms, I was unable to heat the apartment adequately”.

Speaking on behalf of several owners, Peter goes on to say: “We knew that secondary glazing was permitted by heritage bodies. We were also aware that to thermally insulate our windows, because of the sheer size and multitude of shapes, would present a challenge and would need individually tailored units.”

So began the hunt for a suitable provider of windows to meet these exacting requirements.

Selectaglaze were the company chosen to provide a solution to Peter and his neighbours issues and what they produced exceeded all expectations by all accounts, “not only from a thermal point of view but because we no longer hear the noise from Euston Road. We’re seeing a great improvement in our heating bills too!”  In addition to Peter’s “Tower Room”, where the windows have been treated with slimline side-hung casements, the 4.6 metre high master bedroom with bathroom mezzanine, features four monumental windows treated with lift-out units which offer a practical way of treating windows that are rarely used but which need access for cleaning or maintenance. Other windows within the apartment were treated with horizontal sliding secondary glazing.

Peter says: “This is a highly theatrical space and I feel privileged to live here, particularly now that cold days are a thing of the past”. Peter’s unique apartment, with its spectacular views, is so stunningly presented that it is now available to hire for drinks receptions, private dining, small musical events and art exhibitions. 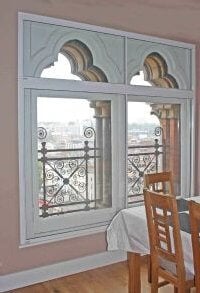 For more information on some of Selectaglaze's solutions to the challenges of period living, visit. www.selectaglaze.co.uk.