Skip to content - How to create a Victorian bedroom

The first distinguishing feature that defines a Victorian bedroom is that it would have a fireplace, unlike this room in both the period before and the period after. In the preceeding periods, inhabitants would rely on thick blankets to keep warm and later in history, on cast iron radiators and electric heaters. The location of this fireplace may determine where the furniture will sit comfortably so that the fireplace can be viewed as an attractive feature rather than a hindrance to the arrangement of the room.

As the bedroom was not a public room and only the very wealthy would have overnight guests, plaster mouldings in bedrooms tended to be modest and consist of simple plain plaster cornice and a small simple ceiling rose.

The bedroom usually did not feature the many wooden mouldings such as dado and picture rail mouldings, but usually just a simple traditional skirting and Victorian architrave on the windows and doors.

What was in a Victorian bedroom?

Victorian beds were typically small – not king or queen size that we are so used to today – and high so that people had to almost climb up to them. Beds were typically made of a dark wood such as mahogany or rosewood with a matching style of headboard and footboard, with an iron frame and wooden slats forming the structure and support of the mattress and often borrowing a French style. Otherwise, they were in tubular iron or brass with cast iron connectors to form an attractively shaped bedframe. The original Victorian mattresses would have been made of cotton and straw but we suggest you buy something a little more comfortable than this.

In the richer households such as the Royal household, the bedrooms were often very extravagant as they served more than the commonplace purposes of rest and dress. If you were someone important in the King’s entourage you may be invited to a meeting by the side of the kings bed. 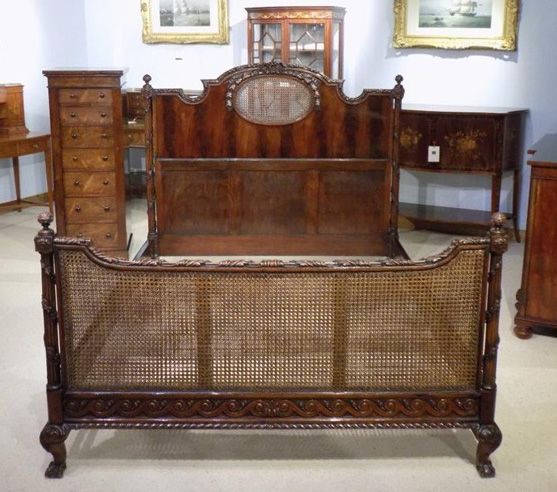 Bed from a selection at Christian Davies Antiques

Either side of the bed would be matching bedside tables, the perfect homes for books, glasses and a lamp, in a dark wood such as mahogany. Finding matching antique Victorian bedside tables often proves difficult with most antique dealers only having odd tables. If you do find a pair expect to pay more than you would for two single tables, as they are really hard to find. 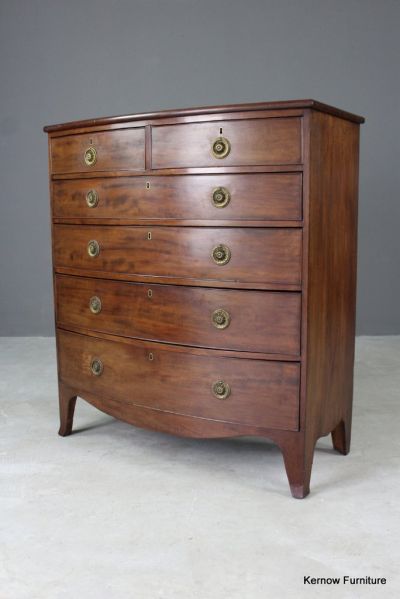 Chest of drawers from a selection at Kernow Furniture

A bedroom would always have a dressing table with small drawers with a small wood framed mirror in a curved design, with brushes and lotions located on this dressing table. A small open backed chair, with a well padded seat in a matching wood is ideal and can be tucked under the dressing table when not in use. These small dressing tables are plentiful in antique shops and although they may not come with the original mirror, usually it’s fairly easy to find a mirror that will fit.

A large wardrobe in a dark wood would be located opposite the bed, with finer pieces often having inlaid marquetry. Typical features of these wardrobes would be a cornice with dentil marquetry inlay above a central door whilst inside there would be a hanging rail and brass hooks. Often there was a full length mirror with bevelled glass on the front of the wardrobe which is handy and gives a feeling of space and light in a room that might otherwise appear dark. A pair of matching chests of drawers would often be located on opposite walls to be used by the lady and gentleman of the house.

Victorian bedrooms often had an area where the person would get dressed, usually behind a decorative screen which would obscure their modesty from the rest of the room. This can be useful in a period style bedroom to hide mess and clutter.

A great addition to a Victorian bedroom is a chair, convenient for putting on socks and for hiding out from the family for half a hour snatched with a book. This should be low and well upholstered in a bright luxurious fabric. 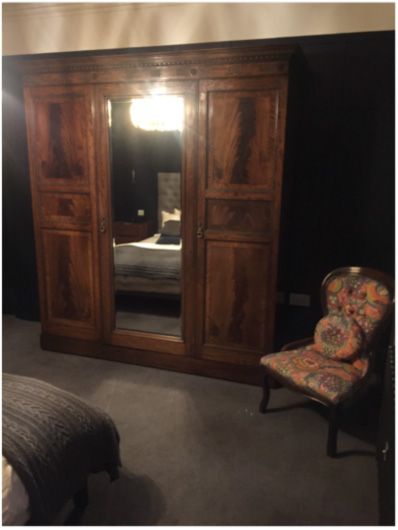 In the households of the great and the good, there would often be adjoining bedrooms for a husband and wife, one decorated in a more masculine style with darker colours and the lady’s room decorated in lighter and more pretty fabrics and wallpapers.

To add to the Victorian authenticity, you could add a pine washstand with a china bowl for decorative purposes.

If you wanted to add a touch of humour, amusement and a talking point to your bedroom renovation then a chamber pot could be positioned under the bed along with a bedwarmer – a metal container shaped like a modern frying pan which was in Victorian times, filled with large stones heated in a fire and placed under the covers of a bed, to warm it up. These items can be purchased cheaply from a flea market.

Typically, decor for a Victorian bedroom would consist of a pallet of restful colours which would be chosen with ideal wall decoration floral patterned wallpaper in a soft hue such as green, pale blue or yellow. As the walls would not usually have dado rails or picture rails, the wallpaper would go from the skirting right up to the coving. 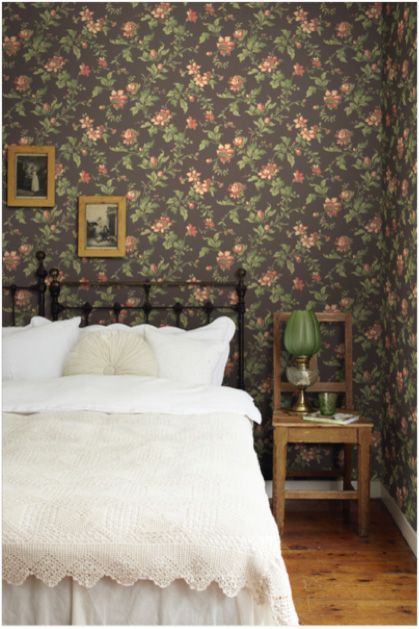 Nighttime being the coldest part of the day, bedroom curtains should be thick to keep draughts out and were originally often hung in several layers ie a lacy thin fabric would cover the windows and allow a modest amount of light in and some thicker curtains with better insulating properties would be closed at night time and held open during the day. These would be kept open with decorative brass or cord holdbacks in coordinating colours.

Lighting should be modest to pay homage to the original Victorian gas lamps that would have been used and so that the room is bathed in a gentle pool of soft light rather than brightly illuminated. A medium sized semi flush ceiling light would be perfect with some pretty table lamps situated on bedside tables.

The ideal flooring would be wooden floorboards, waxed to a gentle sheen and covered with Persian rugs in gentle hues.