Skip to content - How To Use Victorian Door Rim Locks

A Rim lock differs from the usual type of mortice lock used on a front door which is internally mounted within the frame of a door. A rim lock is not usually used on a front door as it is not as secure as a mortice lock, unless supported by additional security devices such as bolts. There are many attractive Victorian Door rim locks available for sale that can aid decoration and furnish a door, in the same way as an attractive and decorative door handle. You will also probably wish to use a matching escutcheon to cover the key hole in the door.

Usually, a rim lock is held on by four screws and its keep by two screws; hence all it takes is a screwdriver to remove the lock internally and open the door. Rim locks originate from the time that many doors were around 1 inch thick and could not accommodate mortice locks. Today most doors are usually 1.5-2 inches thick and so can accommodate internally fitted mortice locks. 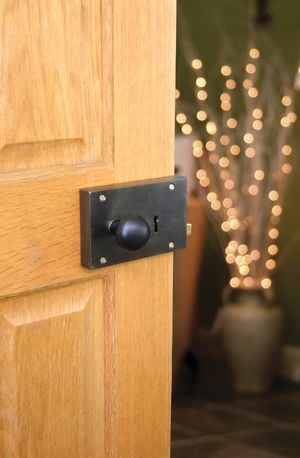 As a security system, rim locks provide the most basic of security. A common make of rim lock will have no more than 15 to 20 different keys. They are usually fitted for aesthetic and decorative reasons. A rim lock is externally mounted on the door hence it is on display. It is commonly used in a bathroom or other internal doors in a house which is not to say that it cannot be used on the main entrances with additional security. The benefit of a rim lock is that as it is externally mounted, there is no need to do complex woodwork or damage a door when fitting them. They also look fitting on period houses and can actually add to the interior decoration rather than detract from it.

Are there different types of rim locks?

There are two main types of rim locks -  rim sashlocks have a latch and will often also require a handle or a thumbturn to retract the latch – sometimes these come as part of the rim lock.  Rim deadlocks just have a bolt and do not require a handle. Most rim locks are operated by a set of knobs which have either been made as a rim set, or can be fitted as a rim set. One knob will have a backing rose for the non-lockable side of the door and the other knob will not have a rose for fitting to the lock side. 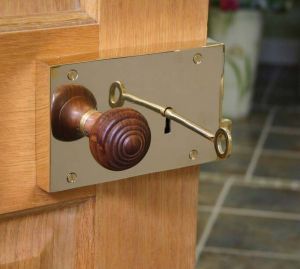 Rim locks are available in many different materials including cast iron, brass, bronze and even wood. Some very old rim locks would have been made from wood and have been large in size with a large key, not practical for keeping on a modern key ring. Reproductions of these locks are available from specialist ironmongers. This style of rim lock would suit an older style wood framed Tudor house. Brass and black rim locks work well on Victorian or Edwardian houses, especially on bathrooms.

Some rim locks are in fact designed particularly for bathrooms and even include an indication of whether the room is occupied. A much more refined way of finding out whether there is somebody in the toilet than attempting to open the door. 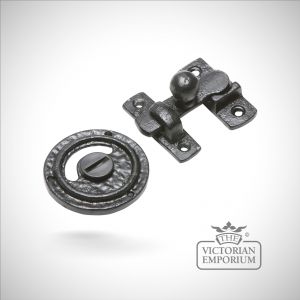