Shower curtain rails are very adaptable as they can go anywhere as they consist of an oval or circular metal loop that is attached to the ceiling or walls of the bathroom with wall brackets/stays. Around this loop are curtain rings and shower curtains hanging from the rings. The curtain rails are typically oval when used over a bath to echo the shape of the bath, although over a circular bath the round shape would be most suitable. In some bathrooms, wall stays would work best and in others ceiling stays. 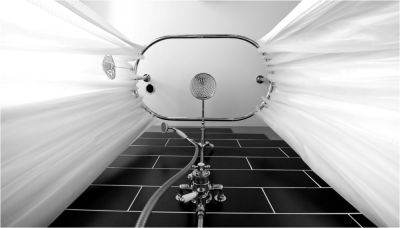 The choice of wall and ceiling fixings, or one wall and wall ceiling fixing, and the oval and round shaped give maximum flexibility for a variety of bathroom layouts.

If for example the bath is situated a fair distance from any wall, ceiling stays would need to be used – ceiling stays can go up to 750mm long so this gives maximum flexibility. Where a bath is situated next to a wall side stays work really well and keep the ceiling free of fixings – your wall will probably be able to take more weight than your ceiling if it is a solid wall unless you manage to locate a ceiling joist for your fixings. Beware stud walls – if you are fixing to a stud wall make sure you fix the shower curtain rail to the upright structure of the stud wall rather than just to the plasterboard.

A more challenging layout is where there is a sloping ceiling which is often to be found in bathrooms that are located up in the eaves of a house. Fixings for a shower curtain rail in this room may be more complicated and you may require brackets at a 45 degree angle to the ceiling if wall fixings aren’t viable in this room.

What accessories do I need to go with a shower curtain rail?

An essential partner to the curtain rail is the water repellent shower curtain to encourage water to splash off it and keep the water within the desired area. These need to be washed every now and then to keep them looking fresh, as being fabrics that are constantly getting soaked and not fully drying out, they are the perfect breeding ground for mould. Most shower curtains are treated with an anti bacterial covering to stop them from rotting and many are also supplied with curtain rings. You could even take your choice of fabric and treat it with a waterproofer to make your own bespoke shower curtains. Victorian bathrooms tended to be plain and understated so a simple pale coloured curtain is the best

You may need to have multiple shower curtain sets to stretch the full circumference of your shower curtain rail. One pair of shower curtains is designed to stretch along the side of a panelled bath, so two sets is the minimum you are likely to need to go all of the way around your bath.

Shower curtains can be tied against the wall when not in use and secured with curtain tie backs or hold backs, or just simple hooks.

There is a real advantage to using shower curtain rails in really small bathrooms where there is no room for a bath and separate shower or even bathrooms where there is no room for a bath at all and where building a shower enclosure would make the space really restrictive. The best solution in these really small rooms is to make them into wet rooms with a shower curtain rail to be used around the shower head when the shower is in use so as not to soak the toilet and sink area in the bathroom and keep the water contained within the drain area. The shower curtain can then be secured to a wall and kept out of the way when the shower is not in use.