Skip to content - Is A Victorian Roll Top Bath Right For You And Your Home?

If you live in a Victorian house with a spacious bathroom, there are many different bath options for you and you may feel overwhelmed by the choice of different styles, sizes, shapes and depths of baths available as well as the different materials these baths are made from. Depending on your space, a Victorian roll top bath could be a great option.

What are roll top baths made of?

Roll top baths come in a wide variety of styles, size and materials -  there’s acrylic, steel, fibreglass or cast iron to choose from. And there are freestanding clawfoot baths, fitted baths with side panels, round baths, sunken baths, baths built on a raised platform, Jacuzzi baths.

You need to analyse both your preferences and requirements as well as the style of your house to determine the most appropriate choices for your bathroom.

If your bathroom is really small, choosing a straight sided panelled bath is a more efficient use of space than a freestanding bath. If you live in a Victorian house, this can be made to look authentically Victorian by choosing a really plain bath, preferably steel or cast iron and fitting side panels made from wooden tongue and groove painted in a pale off white or neutral tone.  Many Victorian bathrooms, plain and functional in character, had panelled baths and you can paint all of your bathroom woodwork in one uniform colour. 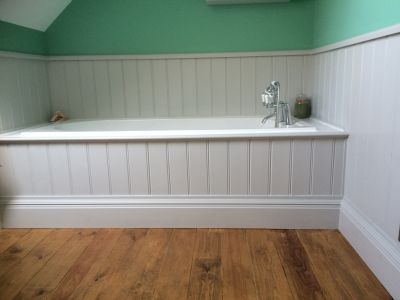 If you want a genuinely period style bath for a Victorian bathroom, cast iron is the material of choice. If you like a deep bath, a clawfoot bath such as a slipper or roll top bath is a really great choice – a bath which looks beautiful and is also a pleasure to use.

The benefits of a cast iron bath

Cast iron baths are extremely strong and durable and will last you for a very long time as demonstrated by the number of antique reclaimed cast iron baths that are for sale. Cast iron is extremely difficult to damage and cannot be easily scratched, cracked or dented. It is resistant to even the most abrasive cleaners and very easy to keep clean. Where there is wear and tear they can be re-enamelled to preserve them for longer.

Cast iron has the ability to retain heat which will keep bath water warm for long periods of time however it can often take a while to heat up, especially if your bath has been standing in a cold room. This just takes a little planning ahead. Fill your bath with the hottest water possible 10 minutes before you wish to use it – check the temperature before getting in.

Cast iron baths can be extremely heavy and you need to check your floor is strong enough for the cast iron bath plus the water it holds. It is best to speak to a builder about this and get them to look at your floor joists if you do not feel confident making the decision yourself.

Many roll top baths have claw feet – and this type of bath are generically called a clawfoot bath. They became popular in the late 19th century although they were originally designed in the mid 18th century, where the ball and claw design originated in Holland. The design spread to England where it was embraced by the aristocracy, just as bathing was becoming more fashionable. Early bathtubs in England tended to be made of cast iron, or even tin and copper with a face of paint applied that tended to peel with time. 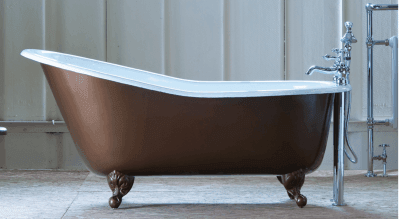 Clawfoot baths usually require more water than a standard bathtub, because generally they are larger, and come in 4 major styles:

Many of the Victorian roll top baths available that are reproduced based on original designs come with copper or nickel plated options for the exterior of the bath and sometimes also the inside. This lends a rather decadent steampunk feel to a bathroom and is perfect teamed with a matching copper or nickel heated towel rail and copper or nickel taps. This is stunning if complemented by a bare brick wall in your bathroom. 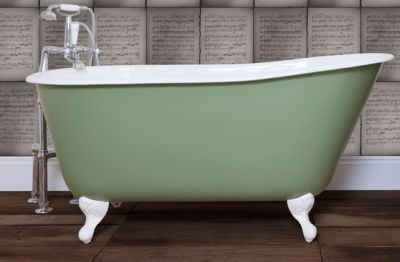 If you purchase a really lovely Victorian cast iron bath, you should not skimp on the type of tap you purchase. There are some really lovely taps available in a range of finishes such as chrome, nickel, copper and antique gold, often with some lovely porcelain handles. Standing taps which stand on the floor outside the bathtub and pour water into the bathtub give a really authentic period feel. 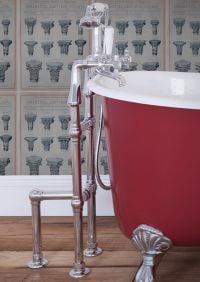 Admin: This entry has been viewed 4494 times.