The first drape or curtain probably hung at the entry of tent somewhere in a middle-eastern desert in the very early days of civilisation. The cloth gave some privacy but also, when wetted with water, provided some primitive air conditioning to temper the hot desert winds.

Our word for window derives from Anglo-Saxon "vindr eage," meaning the "wind's eye and in medieval times windows were very small to reduce exposure to the elements. Also glass was expensive and the preserve of the rich. Glass could only be made in very small pieces, which were joined together with lead strips to make a window (leadlights). Wooden shutters were commonly used to keep out light and cold, and to maintain privacy.

Hand-made fabric hangings or curtains were often used on walls as decoration, or to divide up room spaces in grand country or town houses. They were also used around beds to stop drafts and aid privacy.

At the end of the 17th century, a new process was developed in France which enabled larger sheets of ‘plate’ glass to be made. Houses began to be built with much bigger windows, such as Felbrigg Hall, Norfolk with it’s magnificent bay windows overlooking the estate. Fabric was still all hand-made and very expensive, but from around 1750 the wealthy and the increasingly well-off middle class started to use curtains and drapes at their windows much in the way we do today.

In her book “1700” Maureen Waller describes how thieves used specia

l hooks to poke through the windows of the rich, pull out the curtains, and make off with the valuable fabric.

By the 1840s with the Industrial Revolution having had its full effect, fabrics could be made much more cheaply using power looms and other machinery and curtains started making an appearance in the homes of more ordinary folk. Fabrics of a high quality could now be woven at a much lower cost, incorporating flowers and leaves, and fine outlines in designs influenced by French fabrics. There were also innovations in dying and printing. Whereas at the beginning on the 19th century dyes were made from plants and animals substances which were hard to replicate consistently, in 1856 William Perkins discovered the first aniline dye, mauve. Other synthetic dyes followed in the 1860s, 1870s and 1880s. Roller printing was also introduced from the mid 1820 using engraved rollers which was much faster than block printing. In the 1860s William Morris and Thomas Wardle rejected the synthetic dyes and used natural pigments to create printed textiles that they began to sell as furnishing fabrics. However many consumers preferred the more vibrant colours offered by synthetic dyes at the time and it took time for William Morris and his designs to be appreciated and popularised, and become the enormous influence in Victorian and Arts and Crafts interior design that they have emerged as today.

What are the different types of curtains?

The Victorians loved heavy living room curtains often in several layers – great for keeping out those freezing drafts in their chilly houses. There were several other reasons for this affection for ornate, heavy curtains: they valued their privacy more than they valued any views and wished to exclude the outside world from the cosy domestic space. Also curtains protected precious possessions from sunlight damage. Above all curtains allowed them to show off their wealth and taste through the colour, pattern, texture and surface of the curtain fabric and the design and skill which their curtains required. 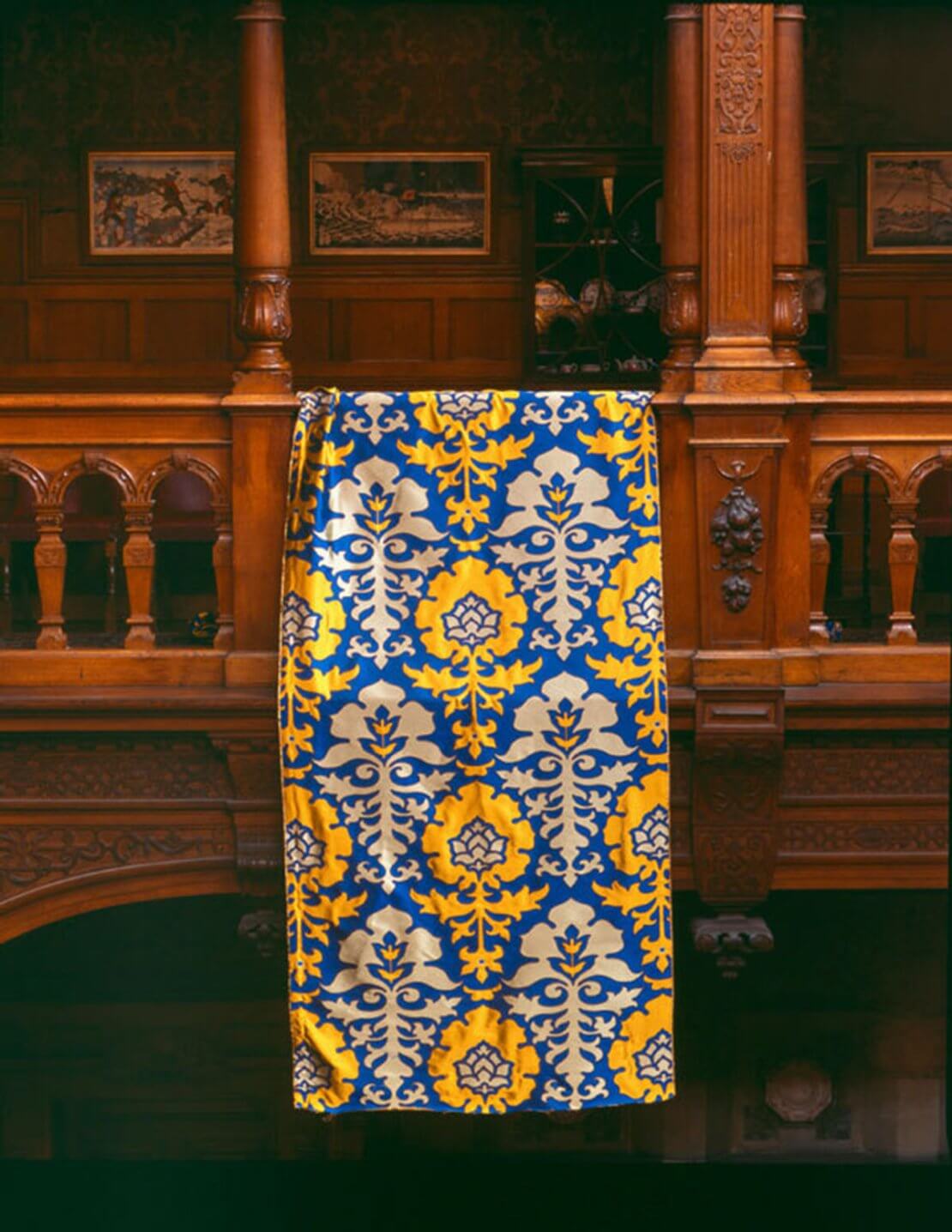 They also loved the white and frilly look - especially for bedrooms. They used lightweight cotton fabrics like muslin and dimity liberally to create a fresh and clean design.

The several layers of window coverings used by the Victorians consisted usually of a blind next to the glass, with up to three separate sets of curtains in the main rooms of the house. Sub curtains of lace or sheer fabric, a middle set of lined curtains made of velvet or damask and a top pair made of a heavy material such as tapestry. Pelmets were used to dress the top of the window and long curtains were looped over large hooks so that they draped onto the floor.

Sub curtains, often made of Nottingham lace, were good for catching dirt as they were easier to wash and cheaper to replace than the other heavier layers of curtains. Of the three layers, it was usually only the middle curtains that were opened and closed.

Heritage fabrics mostly had brown or black backgrounds with smaller patches of different dark colours traditionally incorporated in a pattern.

Pelmets were made out of wood or plaster and functioned to hide the curtain pole and any mechanical parts. They would be moulded in one of the Classical Order styles and gilded or painted to match the woodwork of the room. Lambrequins were frames made of fabric with a shaped border hanging down on either side of the window, and could be used instead of a pelmet to give a good finish to the top of the window.

Tie backs were chosen to complement the design of the curtain fabric.

“It’s curtains for you”
A favourite phrase in gangster films of the 1940s and 50s originated from the days of Victorian theatre when the end of each act would be signalled by the curtains coming down.

" didn't like the play, but then I saw it under adverse conditions - the curtain was up". Groucho Marx

The ancient Greeks first used shutters with fixed louvres made out of marble.  Later the use of shutters spread widely and wood shutters became the norm.

In more sophisticated (and warmer!) parts of Europe shutters had movable louvres that could be adjusted to allow in different amounts of light and air, but in Tudor England shutters were generally just made of solid wooden boards.

At the time glass could only be made in small pieces, and was expensive so many ordinary people’s houses just had wooden shutters in the window opening. For those who could afford it, small pieces of glass joined by lead strips (leadlights) were used in the upper part of the window to let in light. Hinged wooden shutters were used in the lower half and these could be opened to let in the air.

From the end of the 17th century, when glass could be made in much larger sizes, fully glazed windows started to replace shutters in England.  To this day however, shutters have remained popular in warmer and tropical climates and for decorative and security purposes.

Thank you for this nice article on curtains. It is just what I needed to help me in my research for the novel I am writing!