The practice of using stone as flooring goes back thousands of years but in the Middle Ages it began to be recorded that flags (or rushes) would be laid across the stone to sweeten the air when trodden upon, thus giving rise to the word ‘flagstone’ as a description of stone flooring. Sweet smelling herbs such as lavender, camomile, rose petals, daisies and fennel were added to disguise somewhat prevalent bad smells.

The effectiveness of this method of air freshening was, as with all housekeeping, only as good as the housekeeper as is noted by the great Scholar, Humanist and Reformer Erasmus (1466-1536) who wrote to a friend describing the state of the Medieval floors during the Middle Ages:

"The floors are, in general, laid with white clay, and are covered with rushes, occasionally renewed, but so imperfectly that the bottom layer is left undisturbed, sometimes for twenty years, harbouring expectoration, vomiting, the leakage of dogs and men, ale droppings, scraps of fish, and other abominations not fit to be mentioned. Whenever the weather changes a vapour is exhaled, which I consider very detrimental to health.

It is possible that the recurrence of the Black Death throughout Europe over a period of time began to encourage households to sweep out this odious and harmful detritus and consider a different type of floor covering one of which was the floorcloth.

Legend locates the origin of the floorcloth—a durable floor covering made from heavily oiled and decorated canvas—in 15th-Century France. However all we are certain of is that sometime during the Renaissance, probably in France or England, people began covering portions of their stone or plank floors with cloth sturdy enough to withstand the tread of shoes and boots. Some time later, people began embellishing the basic cloths with colourful patterns. By the 18th Century, floor cloths routinely covered floors in both Europe and the American colonies and artists depicted them in numerous woodcuts and paintings of the period.

Known then alternately as canvas carpets, rolled canvases, crumb cloths, or wax cloths, the name most frequently associated with floor cloths in England was "oylcloths" because of the heavy linseed oil and oil-based paints that added strength and weight to the fabric. A floor cloth was made with a piece of heavy fabric, usually a seamless canvas such as sailcloth, sealed with an aqueous glue to protect the fabric from the destructive effects of oil. The floor cloth maker would then prime the cloth and lay several coats of oil-based paint over the primer, the last usually with a colourful design. A coat of varnish protected the design and added depth to the colours. The multiple layers of paint and varnish gave the floor cloth its durability and strength similar to that of heavy leather. This method evolved into a product similar to linoleum flooring.

When were rugs invented?

The late Renaissance marked a golden age of rug making in such places as Turkey and Persia. The opening of numerous trade routes made beautiful, artisan produced rugs available to European buyers. These fine rugs would be used, like tapestries, to adorn walls or often laid across tables or couches. It was only in the eighteenth century with the development of weaving looms of an industrial scale that carpets were beginning to be used on the floor. 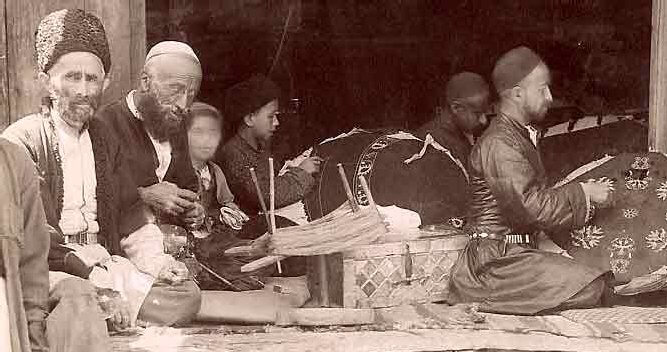 Thomas Whitty (1713–1792) was an English carpet manufacturer who founded Axminster carpets in 1755. He had been impressed by a large Turkish carpet he saw at a market in London and upon his return to Axminster he used his skills as a weaver to work out how to produce a product of similar quality. After several months work he completed his first carpet in 1755. The completion of the early hand tufted carpets was marked by a peal of bells from the parish church as it took a great amount of time and labour to complete each one.

His carpets gained a good reputation and were chosen by wealthy aristocrats to have in their country homes and town houses Many of the great and the good including King George III and Queen Charlotte, visited the factory and purchased carpets. In 1835 Samuel Rampson Whitty,Thomas’s, grandson was declared bankrupt following a fire seven years earlier, which had destroyed the weaving looms.

Blackmores of Wilton near Salisbury bought the remaining stock and looms and extended their business to include hand-knotted carpets, which were still called Axminsters. While Axminster carpet is made in the town, this type of carpet is now manufactured all over the world.
Homes owned by prosperous Victorians would have had rugs in the main living areas, hall runner carpets along passageways and up the stairs and boards or quarry /encaustic tiling on floors that were to withstand harder wear. There were a great many humbler houses and cottages, especially in the countryside, that still had flooring reminiscent of earlier centuries such as compacted clay or stone or brick laid on earth. 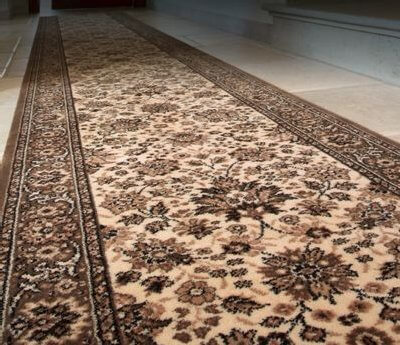 What are stair rods used for?

In the late 18th century, stair rods emerged for practical purposes in the lower-middle to upper class Victorian homes which featured wooden stair cases covered by stair runner carpets. By the late 1700s stair rods were used as a means of installation to hold the carpet runner in place. They were a stylish invention for a practical purpose. Part of the function behind the rods was that they could be used so that, periodically, the runner could either be pulled up or down so that the nose of the stair wouldn’t rub or fade the runner in one place.  However if inexpertly done -and if done too often - this practice of moving the stair runner up or down to prolong the life of the carpet, whilst a good housekeeping economy, could cause carpet slippage resulting in many residents arriving at the bottom of their staircase sooner than intended.  Today’s stair rods are intended merely as decoration as a carpet fitter will tack down the stair runner to hold it in place.

In the wealthier homes, stair rods featured much more innovative and decorative designs. This included styles like metal scrollwork on the bar and different shapes such as triangular shaped rods. Stair rods were crafted in different materials which ranged from brass to wood. Middle-class home owners who couldn’t afford to place decoratively styled stair rods on every step often used decorative rods up to the landing to impress guests while a plain rod was used to secure the runner on the steps farther up the staircase. 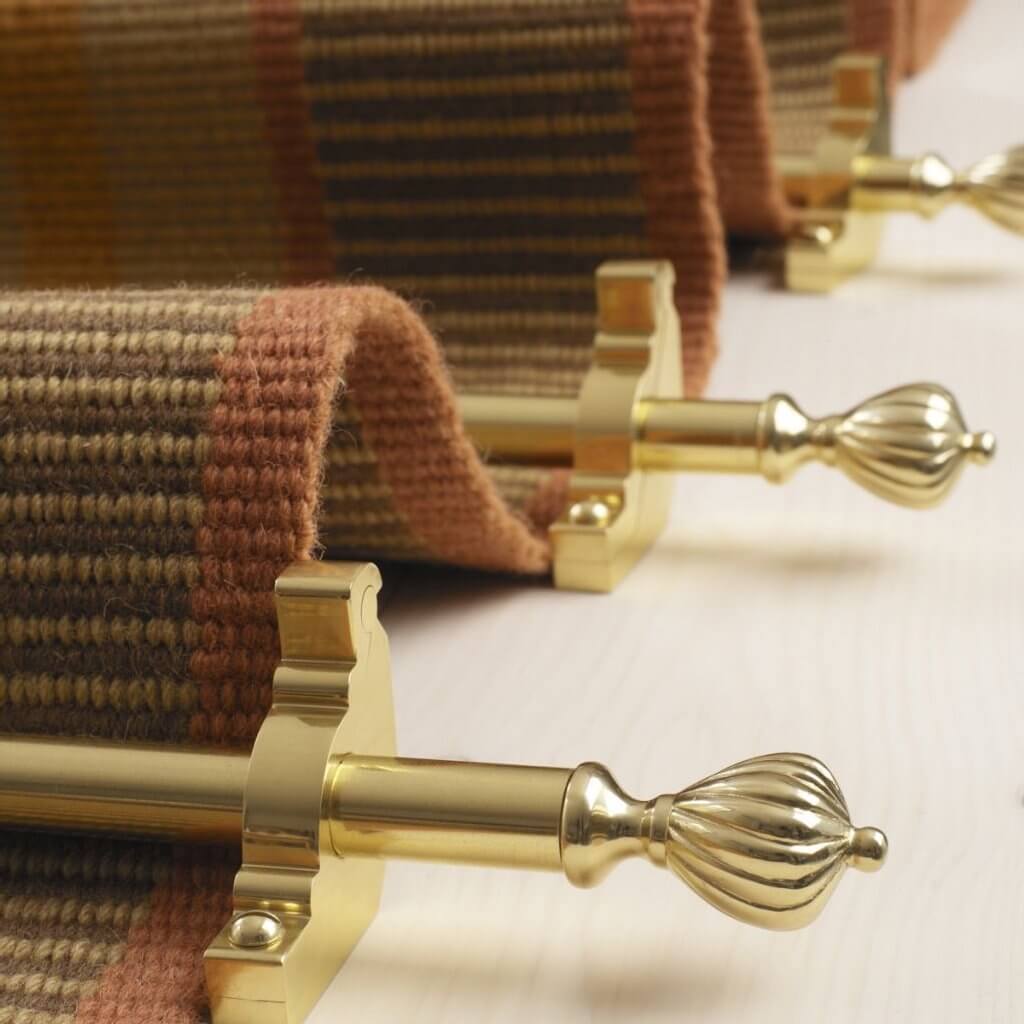 I thought runners were invented for people that couldnt afford full carpets.

​Hi there, your article and advice on finding the right Victorian stair runner carpet has proved so helpful to me. Thank you!

The Victorian Emporium standard stair rods with the pineapple finial just bring the whole look together perfectly. Our hallway looks stylish and welcoming and just as we hoped it would. The pineapple finials make me smile every time I go up and down the stairs.  Thanks Emma for all your help. Cheryl