The history of creating glass goes back to 3500BC in Mesopotamia and the word derives from the latin term Glesum.

Glass is a transparent, typically brittle non-crystalline solid material and has the ability to refract, reflect and transmit light without scattering it. A major use over centuries has been in windows and drinking vessels using soda-lime glass, which is predominantly silica-based whereas many other applications e.g bottles and lenses use polymer glasses which provide a lighter alternative to silica.

How long ago was glass invented?

The history of creating glass goes back to 3500BC in Mesopotamia and the word derives from the latin term Glesum which is believed to have arisen in the Roman glassmaking centre at Trier and to have described a lustrous, transparent substance.

From the 19th century there was a significant development in the use of fancy glass in decorative art, which can be divided into the style groups of Neo-Classical, Art Nouveau, Victorian Geometric, Victorian Floral, Edwardian and The Twenties.

Examples of stained glass are present in the 10th century and in the mid 19th century there was a revival arising from the interest in gothic architecture. Small pieces of coloured glass were fused by lead and details painted onto the glass. Windows were very often filled with stained glass which added a dimension of colour to the light within the building as well as providing a medium for figurative and narrative art.  During the 20th century a number of sculptors used glass as their basic material.

A mirror is an object which reflects light or sound in a way that preserves much of its original quality prior to its contact with the mirror. While the most familiar type of mirror is the plane mirror which has a flat surface, curved mirrors are also used to produce magnified or diminished images or focus light or simply distort the reflected image.

Mirrors are most commonly used for professional grooming, decoration and architecture but also in scientific apparatus such as telescopes and lasers, cameras and industrial machinery. The first mirrors were most likely water-based but the earliest manufactured mirrors were pieces of polished stone such as obsidian, a naturally occurring volcanic glass, dated to c6000BC in Anatolia(modern Turkey).  Polished stone mirrors from Central and South America date from around 2000BC.  Mirrors of polished copper were produced in Mesapotamia from 4000BC and in ancient Egypt from around 3000BC . Metal-coated glass mirrors are said to have been invented in Sidon in the first century AD and glass mirrors backed with gold leaf are mentioned by the Roman author Pliny around 77AD.

Mirrors are manufactured by applying a reflective coating to a suitable substrate, normally glass. The method of making mirrors out of plate glass was invented by 16th century Venetian glassmakers on the island of Murano, who covered the back of the glass with mercury, obtaining near perfect and undistorted reflection   For over one hundred years venetian mirrors set in richly decorated frames graced palaces throughout Europe.  Industrial espionage exported the mercury process to England and France in the 17th century, leading to large-scale production and the resulting cheapening of the process eventually led to making mirrors affordable to the masses. 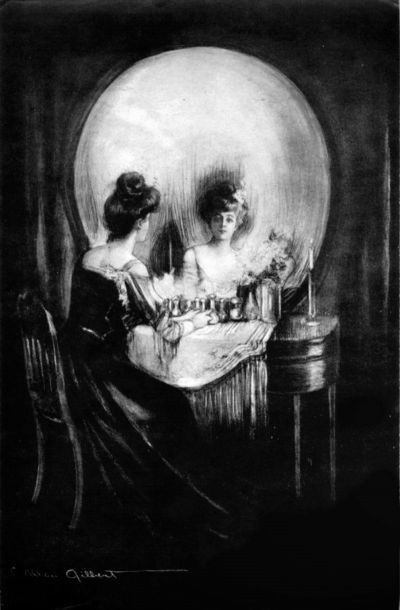 There was a greater diversity of styles in Victorian Britain than in the 18th century, influenced by the competition between the old aristocracy and the newly emerging industrial and business community. Each group tended to use a style demonstrating their identity and their worth, the new commercial classes favouring classical designs to echo their established place in society.