Decorative plaster mouldings and wooden mouldings originate from the Classical Order, one of the ancient styles of classical architecture, each having its own proportions, profiles and details and recognizable by the type of column used.

From the 16th century, 5 distinct orders were recognized whose origins come from Ancient Greece with some modifications by the Romans: Tuscan, Doric, Ionic, Corinthian and Composite. The column consists of the base, the shaft and the capital with the horizontal structure supported on the columns called the entablature. The entablature consists of architrave, frieze and cornice all separated from each other using mouldings. The base consists of the stylobate and the plinth and mouldings with profiles e.g. the convex torus and the concave scotia, terms still used nowadays for skirting board profiles.

What are the Classical Orders? 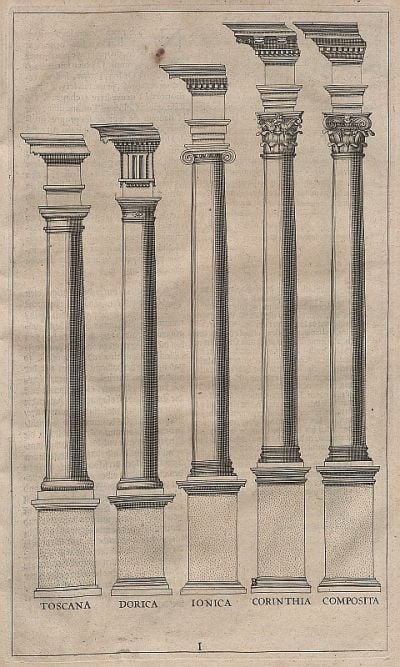 Mouldings, by definition, give form and shape and help bring definition to the objects/spaces they are used within. In architecture mouldings can be found inside and outside of buildings. Architectural mouldings are a fundamental element to the character of Victorian interior design.

Exterior mouldings are used to enhance the appearance of buildings and from the 1800s stucco became a popular material in which to create enhancements to houses as it was more affordable than stone in most areas unless good stone was available locally. In London external stucco was used in the early Victorian period to create smooth, evenly coloured house fronts in terraces and for larger Victorian villas including John Nash’s development of Regents Park. Stucco was popular for houses in seaside towns as it is a hardy material against sea spray. However by around the 1860s stucco became less popular as the price of stone fell and terracotta became used more widely.

Interior mouldings, namely, plaster cornicing, coving and ceiling roses don’t just enhance a room’s proportions but the intensity of decoration within the mouldings can underline a room’s importance - heavy decoration and large decorative features are used to impress one’s guests and are found in the more public areas of the house.

Plaster has been used throughout ancient history in the Egyptian, Minoan, Greek and Roman civilisations. Primitive plastering was carried out using clay and mud, using the wattle and daub technique to keep out the cold and wet.

Plaster mouldings have been used for classical architectural design from the ancient Greeks who used it to beautify the interior of their buildings, the Romans, who adopted much of the Greek style and then added their own and up to the present day. Most patterns have evolved from the foundations of classical design.

Following the fire of London Bridge in 1212, King John ordered that all shops on the Thames, and all brewers and bakers should have their walls plastered inside and out to make them safe from fire. Around this time, wealthy householders frequently commissioned architectural decoration in plaster. Delicate ornamentation in low relief was achieved by the use of wooden or metal tools on the moist plaster, which was then painted and gilded.

Pre 1800s lime plaster was used for internal plastering however after 1800 gypsum or Plaster of Paris was becoming more common. Gypsum is a mineral (Calcium Sulphate) which is a common form of sedimentary rock used to make plaster by heating it to 150 degrees Celsius and then grinding it into a powder.

Leading up to the Victorian Era

During the 18th century, the profiles and types of plaster ornaments increased enormously and although they were copied from historical examples, they were used and interpreted fairly freely. It was the builder, the person who marketed newly built houses, who had to choose the appropriate mouldings for the house and this could heavily influence the interest or not in buying the house. Expensive houses needed elaborate mouldings to justify their selling price and similarly, in lower-class houses, expensive mouldings were neither appropriate nor affordable. Decorative plasterwork was used to emphasize the social hierarchy.

Generally, the rooms that received the guests such as the porch, reception room, dining room, parlour and hall tended to have mouldings that were larger and more decorative than the private rooms.

Mouldings were matched to the use of each room so for example fruit would feature on the mouldings in the dining room and floral swags in the drawing-room.

In the 19th century, however, the mouldings became less ornate and more bulky with heavier detail. In the Georgian period, it was fashionable to leave the dining room chairs against the walls away from the table and so a wooden dado rail or chair rail became fashionable to protect the walls from knocks. The dado rail would be positioned 3 to 4 feet from the floor.

In Victorian times it was fashionable to leave the chairs around the table so the dado rail-served no function and disappeared. Wooden picture rail mouldings remained to provide a feature that pictures could be hung from and the skirting boards became taller and cornices deeper to balance the dado-less wall.

In the mid-Victorian era the tendency was for the frieze to become narrower and for plaster decorations to be on the ceiling. Simple cornicing was still being made on-site and three dimensions additions which were made elsewhere in moulds were then applied to the cornicing for a more decorative effect.

In 1851 Gelatine Moulds were shown at the Great Exhibition and in 1856 fibrous plaster containing hessian and lathes, which was lighter and stronger than solid plaster, was invented. These two inventions made it possible to cast one long piece of decorative cornice in a workshop and reliably transport it to the site to be fitted.

Ceiling decoration concentrated around the ceiling rose from which the light fitting was suspended. From around 1840 roses were cast off-site and then fitted. The decoration on the roses served to catch the smoke rising from the lights and some even had a grille fitted so that the fumes from gas lights could escape up through the ceiling.

Wooden mouldings were born out of a need to disguise the structural elements of a room and sometimes play an important structural role too. For example, Victorian architraves cover potentially unsightly joints and corbels act as supporting brackets for mantlepieces. This is still the case nowadays and choosing the right style of Victorian architrave can be challenging. 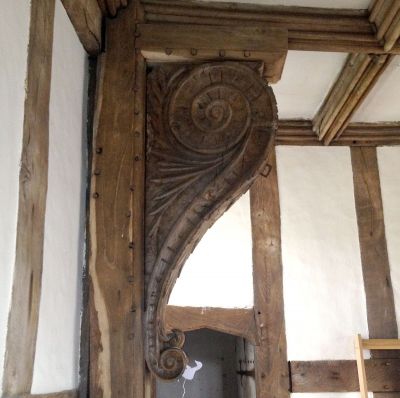 The skirting board joins the walls of a room to its floor, giving a neat finish and adding interest and aesthetic value to the room. Because of wear and tear skirting is usually made from wood although there have been some examples made of plaster as it was thought effective in controlling the spread of fire. Skirting is practical (sometimes called kick-boards) due to this part of the wall potentially being damaged by brooms, general traffic and in the modern-day, vacuum cleaners.

Early mouldings were simple enhancement of structural timber to make the functional into the decorative.  However mouldings that were made separately and then stuck on were easier to make so a range of profiles and sizes was created. There was a proliferation of profiles created in the 18th century with a complex set of rules to go with them.

In the 1840s interior joinery became larger and more elaborate with many simple elements being combined to create many different sorts of architraves and rails, a single style of which different variants could be used throughout a room.

Plaster of Paris is called plaster of Paris because around Paris there were large deposits of gypsum, used to make plaster, which have since been exhausted. (and is now the Montmartre district of Paris)

Plaster of Paris has also been used to smuggle cocaine across the Mexico-U.S. border. Cocaine powder was mixed with a plaster mixture and then sculpted. On May 29, 2008 in Laredo, Texas a 6.6 pound  (3 kilo) religious crucifix was seized by U.S. customs crossing the border in a car being driven by a female Mexican.

The subject of plaster mouldings and wooden mouldings is a really fascinating part of period house renovation rich in history.